Phosphorylation- the Givers and the Takers 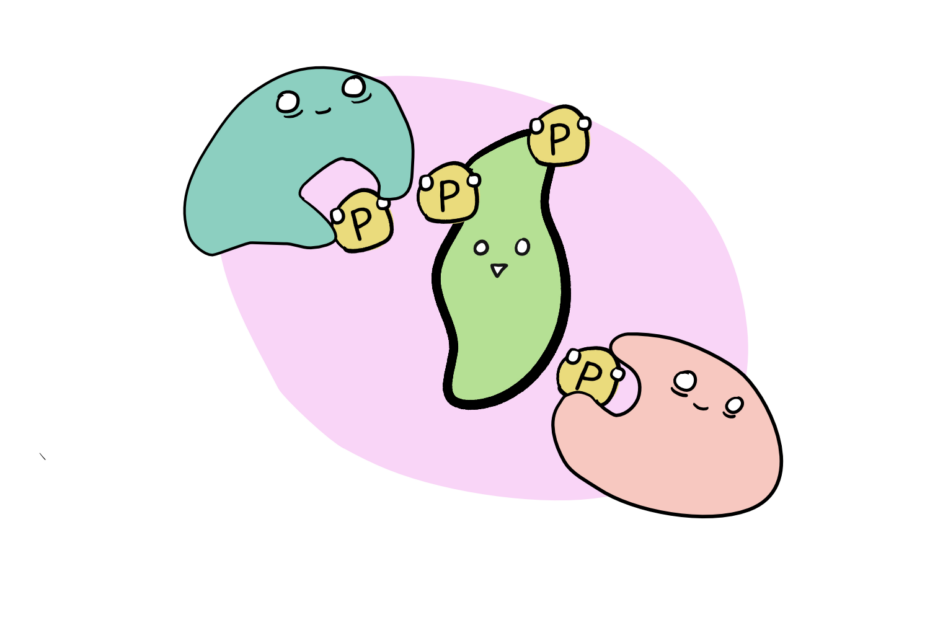 You’ll often hear that proteins are the ‘doers’ of the cell: DNA stores and passes information across generations, RNA is a messenger middle-man, but protein is where the action’s at.

Well, let me tell you that this is overly-simplified pro-protein propaganda (although maybe because my heart belongs to RNA). Because while proteins can do things, they often need a bit of help. Just because a protein is ‘there’, doesn’t mean that it’s active. Many proteins need to be literally chaperoned into the right 3-D structure, require other co-factors to do their job (like minerals and pigments), or only work when they’re part of a multi-protein complex. And on top of that, a whole lot of proteins can be effectively turned ‘on’ and ‘off’, by other proteins that roam the cellular wilderness in search of protein prey.

The ability of proteins to have their activity altered by other proteins isn’t in fact a design flaw. Instead, it’s an example of cellular ingenuity, which allows cellular responses to occur more rapidly, with less energy expenditure, and in more nuanced ways. Plants (and other organisms), often have to deal with rapid and extreme changes. To survive these challenges, they might need to put a whole lot of a certain protein to work very rapidly. Having that protein already available, and simply ‘turning it on’, is much easier and faster than making it all from scratch. Similarly, it’s much more cost efficient to turn that protein ‘off’ when it’s not in use rather than breaking it down (and having to remake it when you need it again).

Switching ‘on’ and ‘off’ requires the addition or removal of phosphate molecules to the proteins, at conveniently named phosphorylation sites. Enzymes called kinases are responsible for adding the phosphates, while phosphatases remove them.

These changes can lead to changes in the structure of the protein, or can inhibit it from interacting with a certain molecule, which ultimately affects how well, or even how, the protein works. And with almost all things in nature, phosphorylation (adding phosphate) or de-phosphorylation (removing it) doesn’t result in a binary ‘on’ or ‘off’, but rather regulates the activity in subtle ways that depend on the protein itself. Furthermore, many proteins have multiple phosphorylation sites, which allow various types and levels of response. Think of protein phosphorylation and dephosphorylation as kind of like a molecular dimmer switch.

The final amazing piece of this puzzle is that it has a built in amplification step. That’s because the enzymes that add phosphates to proteins (called kinases) and the ones that remove them (phosphatases), can act on many, many proteins. Imagine, in a hypothetical scenario, you rapidly need to turn on 100 units of a certain protein in response to a certain stress. With the kinase-phosphatase system, you can have those 100 units already hanging around but turned off, and then, instead of having to make 100 new units, you can make (as a simplified example), just 10 units of the kinase/phosphatase enzymeenzyme, which then each activate 10 of the final protein. Or, even better, you set up a ‘phosphorylation cascade’. Make just one enzyme, let it activate 10 proteins that also happen to be enzymes, and then let them go and activate 10 of the final protein. Suddenly, you’ve changed 100 proteins, by making just one single protein.  It’s pretty much a molecular pyramid scheme, but it’s both speedy and economical.

The amplification of molecular signals through phosphorylation and dephosphorylation gives the cell the opportunity to spend very little energy to regulate its cellular machinery in a rapid way. If you then imagine that each step has its own regulatory inputs and the potential to act on multiple different targets, you’ll get an image of the complex but ingenious molecular interaction at play. A few simple, well-timed biochemical reactions lead to large scale effects. Pretty cool, huh?

2 thoughts on “Phosphorylation- the Givers and the Takers”