This sea slug steals chloroplasts and keeps them fresh 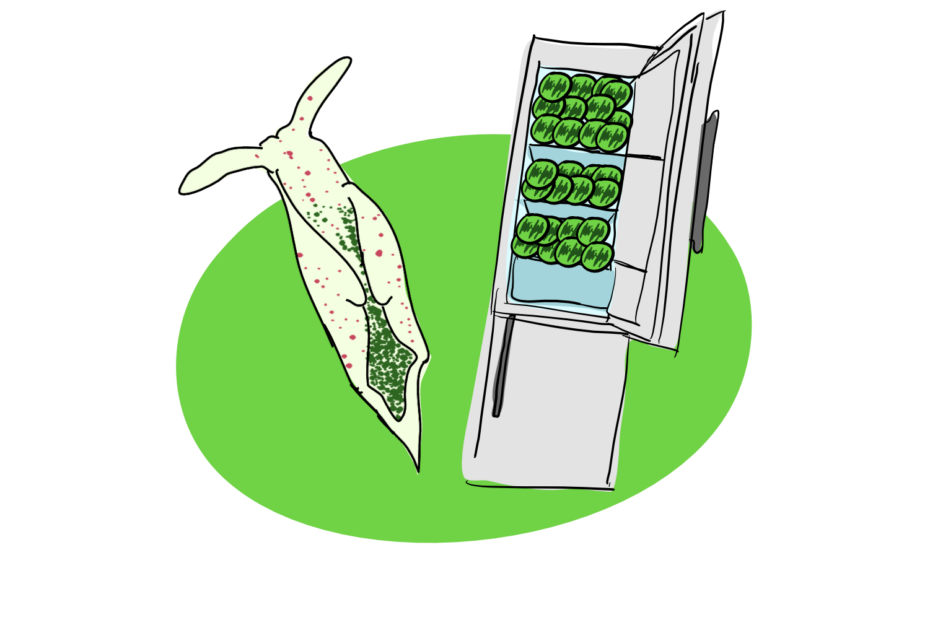 In biology class back in high school, I learned that plants do photosynthesis and animals don’t. But for some years now, researchers have been amazed by an exception to this rule: sea slugs that contain chloroplasts, the sub-cellular plant compartments where photosynthesis takes place. Are animals on the path to become photosynthetic?

I have to be honest. I used to not think about sea slugs at all. I know, I know, I’m missing out on some great (and weird) species, but what can I say? I like things that have skeletons or that do photosynthesis. But then I learned about two species of sea slugs that managed to fulfil one of my criteria – they seem to be doing photosynthesis. With chloroplasts. Under the sea. What?!

I had my doubts, though. To understand why, we have to dive a bit deeper into the molecular action of photosynthesis. In very basic terms, light hitting the photosynthetic protein machinery causes a movement of electrons and protons. Electrons move from photosystem II (a large protein complex) through another protein complex to photosystem I (an even larger protein complex) and then into the carbon fixing reactions that convert carbon dioxide into sugars. At the same time, protons are moved into the space between two membranes, building up energy potential that will be turned into the cell’s energy currency, ATP. This is how photosynthetic organisms gather energy, they store sugars and use ATP in all kinds of cellular reactions.

This dependency on cellular repair components is the reason why we can’t simply take chloroplasts from a cell, put them in a fancy jar and have them do photosynthesis for us. That doesn’t mean that people aren’t trying, but as chloroplasts die quickly when we take them out of their cell, these “artificial leaves” are more art than engineering.

Anyway, back to the sea slugs. E. timida and E. chlorotica keep hold of their kleptoplasts. Since their discovery, researchers wonder how the sea slugs keep the stolen chloroplasts alive against all odds and whether these plastids are still able to do photosynthesis. After all, it could very well be that the sea slugs simply preserve the chloroplasts to avoid them “rotting” and degrading before they can digest them. New research might help us to better understand what’s going on.

Vesa Havurinne and Esa Tyystjärvi from the University of Turku, Finland, were facing a problem: most studies on the chloroplast stealing sea slugs were based on samples gathered in the wild. This led to a number of sometimes contradictory results and left the question unanswered whether the slugs would actually put their kleptoplasts to good photosynthetic use. So the two researchers started culturing both the slug E. timida and its prey, the alga Acetabularia acetabulum, in the lab. While this sounds simple, establishing a new model organism in the lab takes a lot of work. They had to develop ways to keep both the alga and the sea slugs alive, well fed and willing to reproduce. Once they had achieved that, they could reliably study the slugs and their prey.

In a series of experiments, the two researchers investigated the fate of the photosystems in the chloroplast (in the alga) and kleptoplasts (in the sea slug). The researchers used fluorescence measurements to see how well the photosystems were working. As an added benefit, the method is non-invasive, meaning that it does not harm the slugs or the algae.They found three explanations for the extended survival of the kleptoplasts outside their own algal cell.

The first explanation has something to do with the proton pumping I mentioned before. Usually, the protons are pumped about as quickly into the space between the membranes as they are allowed to leave. When a lot more protons flow into the space than can leave, a number of protective measures kick into gear that distribute excess light energy as heat. This process, called non-photochemical quenching (NPQ), removes energy from the system and thereby protects the photosystems from damage. Interestingly, the system still works inside the slugs. Inside the sea slug, a lot of protons gather in the inter-membrane space which triggers high levels of NPQ and therefore effective protection of the kleptoplasts.

The second path to longer kleptoplast life is found in a pool of intermediate molecules that help to move electrons around. The plastoquinones take electrons from photosystem II and move them to the next protein complex in the chain. In the slug (and in the alga), the plastoquinones are kept in a state that allows them to accept more electrons and as a result, the overall flow of electrons is slowed down a little bit. Less flow means less risk of damage means longer life of kleptoplasts.

And finally, the third reason for long kleptoplast life is an alternative method of dealing with electrons past photosystem I. The alga uses flavodiiron molecules to bind electrons before they can cause damage and the same mechanism also takes place once the chloroplasts turned to kleptoplasts. Together, the three mechanisms could explain how the sea slugs keeps the chloroplasts alive for so long.

While this new research answers a whole bunch of questions, it still can’t tell me, whether the sea slugs are actually photosynthetic. While the sea slugs could survive starvation for 46 days after having feasted on algae, the photosystem I inside the kleptoplasts was only active for 6 days. The remaining 40 days of the starvation experiment, the chloroplasts were effectively dead and could not do photosynthesis.

My personal interpretation is this: the sea slugs evolved to pick their prey very wisely. Their alga of choice already contains a number of adaptations to have very stable photosystems inside their chloroplasts, namely the protective flavodiiron molecules and a tendency to keep the pool of plastoquinones less active. After having eaten the alga, the slug then keeps the chloroplasts/kleptoplasts fresh inside its body so that it can digest them at a later time point – like a built-in fridge. During that period, the photosynthetic electron transport chain remains technically able to push electrons around, but there is no significant production of sugars or ATP. It’s a bit like keeping tomatoes in the fridge – you don’t expect them to continue to grow and make more fruit, you just expect them not to rot as quickly.

It is hard to say whether the phenomenon of maintaining kleptoplasts actually offers a major advantage. In a 2015 study, researchers compared E. timida to a very closely related species, E. cornigera, that does not retain kleptoplasts. While E. timida did survive a much longer starvation time, the effect could not be conclusively attributed to the kleptoplasts. For example, the two species originate from very different habitats and therefore might have other reasons for their (lack of) starvation resistance.

For Vesa Havurinne and Esa Tyystjärvi, however, it could be easy to explore this question further. They have a reliable culture setup for the slugs in the lab and could (and, by my guess, will) test the survival of starvation of E. timida in the light and in the dark – if they live longer in the light, that might have something to do with photosynthesis in the kleptoplasts. Plus, there are a tonne more experiments that are possible, now that they have the two species in the lab.

Until now, we don’t have to rewrite biology textbooks. Photosynthesis remains a specialty of non-animal things like plants, algae and cyanobacteria. That doesn’t mean that we might not be up for a surprise, maybe soon we’ll have the first proof that a tiny sea slug steals chloroplasts to do photosynthesis. Until then, E. timida remains another sea slug weirdo that, at the very least, has an effective molecular fridge for kleptoplasts.