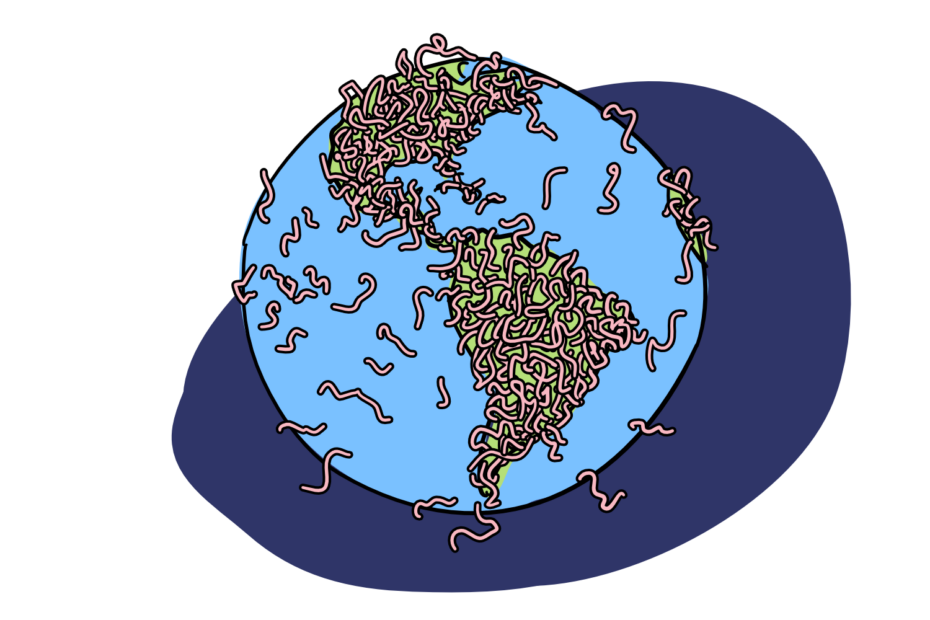 Plants perceive the chemical signals that waft off worms like bad B-O as a sign to hunker down and start preparing their defences.

The fact that nematodes -a type of small slender worm- are the most abundant animals on earth is almost definitely one of my least favourite facts.

Don’t get me wrong, I’m not an anti-wormer. But you might say I’m a bit of a worm snob – I simply prefer the fancy segmented ‘earthworm’ variety (aka annelids). While earthworms exist in my mind as friendly soil-living earth munchers that are ‘just the right size for a small child to put in its pockets’, I know that nematodes can range from microscopic to over a metre long. I know that they can live literally everywhere – from polar to tropics, in fresh and salty water, across mountains, deserts and in the deepest earth and ocean trenches, and might even be able to survive a trip through space! Our world is, to put it mildly, simply FILLED with nematodes.

And the thing is, some of these nematodes are not very nice.

Scientists approximate there to be more thamillion nematode species, so it’s probably not fair to paint all nematodes with the same brush. And realistically, nematodes play an important role in practically every ecosystem and are even used by humans to, for example, destroy other pests*. But still.  Hookworm, pinworm, heartworm? All caused by nematodes!

Nematodes can also be a huge pest for plants – with plant parasites responsible for more than 100 billion US dollars worth of damage to agricultural plants alone.

Luckily for plants (as well as for us humans who like to eat them), plants have come up with ways to defend themselves. Past studies have shown that the mere presence of a nematode – even the non-parasitic kind that aren’t out to get plants – is enough to send plants into a fluster, causing them to rapidly activate molecular defence pathways that aim to prevent attack. But it hasn’t always been clear how plants can know that the nematodes have arrived.

So, back in 2015, Patricia Manosalva, Murli Manohar and colleagues set out to understand just that. Their first stop was to understand the kind of chemical body odours that the worms might be giving off to trip the plants’ defences.

Previous research had shown that nematodes make a bunch of pheromones known collectively as ascarosides. Ascaroside pheromones had broadly been linked to developmental cues and social behaviour of the worms, with a range of different pheromone flavours found –  more than 200 in total.

So to begin their investigations, the scientists looked specifically at several genera of plant-parasitic nematodes, to understand whether they produced ascarosides (and also, what type). They successfully identified a molecule, which they named ascaroside number 18 (ascr#18), in all five of the parasites examined. They then put isolated extracts of ascr#18 into water at different concentrations, and dunked the roots of arabidopsis into that water before testing the plant’s defence systems. Plants that had been in contact with the pheromone clearly initiated their defence systems, as demonstrated by their ability to more rapidly respond to subsequent bacterial infection.

At the molecular level, the ascr#18-treated arabidopsis plants were also shown to have increased the expression of various defence-system genes. Interestingly, although nematode-plant contact would generally occur at the roots, the defence response could also be activated when ascr#18 was injected into the plant’s leaves. Furthermore, ascr#18 was found to trigger plant defences in different plant species –  tomato, potato and barley, and created a defensive response that enhanced resistance to different types of pathogen. The authors also tested some of their other discovered ascarosides, and could variations in the way different plant species reacted to different types of ascarosides at different amounts.

Of course, the ultimate proof of concept was to show that ‘smelling’ the ascarosides and subsequently activating their defence systems could help the plants survive incoming nematodes. So the scientists treated the plants with the ascr#18 solution, and sent in the worms! And it worked: under certain concentrations and treatment conditions, pre-exposure to ascr#18 could reduce subsequent infection of both cyst-forming (ew) and root-knot forming (ew) nematode types.

Overall, the scientist’s could show plants’ ability to sense nematode presence, and respond accordingly, thus limiting damage to themselves. As well as being an important clue to understanding just how plants can possibly survive in a world literally teeming with worms, it might also be a tool for scientists and farmers to use to stimulate plant defences when times get tough.