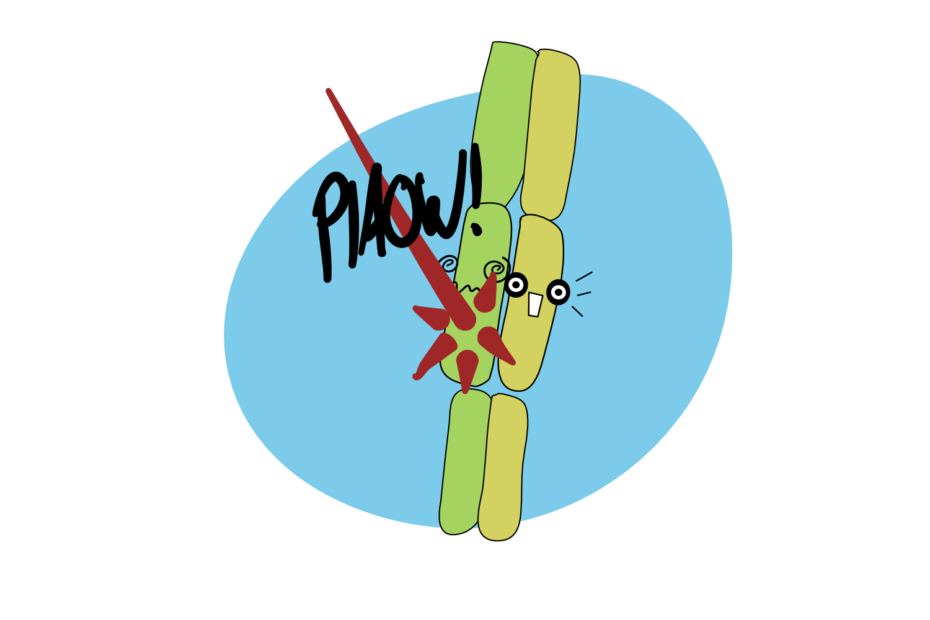 Plants are better than you.

They’re better at fixing carbon (hello photosynthesis). They’re better at attracting bees. They’re generally just a whole lot prettier than you, even this guy And, relevant for today’s post, they’re better than you at surviving laser attacks… providing that the lasers only damage a few cells at a time, and the plants get given a somewhat long time to recover between each shot.

This story begins with damage.

Plants, they get damaged a lot. Partially because, unlike us animals, plants are not super good at getting out of the way of the multitude of attacks that the world subjects them to. From physical forces like wind and rain, but also from all manner of creatures, who want to eat them, steal their fibers for clothing or cut bits off them to make their houses.

But, possibly because of that tendency to get damaged, plants are also really good at rebuilding. They can easily grow new leaves, but can also reconnect disrupted vasculature and regenerate complex structures. You know that experiment where you cut the top off a small plant, and it suddenly grows two shoots? Most of us animals, we can’t do that.

And the thing is, if anything, plants actually have to put in more work when it comes to healing than we multicellular animals. Because they have cell walls, when they lose a couple of cells or get a small flesh wound, they can’t just shuffle things around moving cells into place to fix the problem. Instead, they activate a type of recently-described and incredibly complex process called ‘restorative cell division’. It involves:

Although it’s been known for almost a century that plants like to repair themselves by doing bizzarely-directioned divisions (i.e, part 3 of the process), recent work by Petra Marhava and colleagues recently shed some light on the whole process.

And they did it using LASERS.

I want to pause a bit here to ask you all a question. My friend, let’s call him Henry, recently tried to convince me that magnets are cooler than lasers. Which is just… objectively wrong, right??! Please feel free to vote in the comments about this issue. But only if you agree with me.

Anyway, Marhava et al, used lasers to blast away individual arabidopsis root cells, and then used a special kind of microscope that has a vertical stage (and therefore allows plants to keep on growing over time), to watch what happened after the blasting.

In my mind, they went ‘piaow piaow’ every time they ablated (that’s the official term) one of those cells. But it’s possible that they are more mature than I am.

The found that after ablation, in nearly every case the cell in the next layer to the inside of the root would divide to ‘fix’ the hole. This in itself is pretty special, because, with the exception of the cells at the very tip of the root, most root cells only divide in the vertical axis (up and down, aka anticlinal divisions). Dividing side-to-side, known as periclinal division, doesn’t usually make a lot of sense, because cells in different cell layers have different identities.

This inside-to-outside fixing happened no matter which cells the scientists blasted (piaow-piaow!). Lateral root cap cells were fixed by epidermis cells, epidermis by cortex, cortex by endodermis, and endodermis by pericycle. Plus, it even worked when multiple cells were blasted away (piaow-piaow-PIAOW!).

It didn’t work, however, when cells too far from the root tip were blasted. Interestingly, the precise definition of ‘too far’ seemed to differ from cell type to cell type, with more internal types being more resistant to laser attack. Furthermore, the ability to regenerate seemed to be tied to a type of transcription factor known to regulate stem cell activity, known as PLETHORA. The loss of regeneration power correlated with the known expression gradient of PLETHORA, that decreases from the root tip. And altered expression of PLETHORA, which made it present throughout the entire root, was sufficient to promote regeneration in places previously deemed ‘too far’

Apart from the pretty amazing feat of being able to ‘divide to fix’, the adjacent cells also made sure they did so in the fastest way possible. Once the lasers had done their thing, the healing cell underwent accelerated cell cycle progression, allowing it to more rapidly fix the hole.

And then, once a new cell was in place, its identity was altered- by activation of stem cell programming- to make sure that it matched the other cells in its layer. Interestingly, in the fairly rare case that the division came from outside, as opposed to inside cells, the fixed cell didn’t end up with the right identity. Suggesting that the inside-out method is key to successful regeneration.

Although the authors didn’t work out all of the factors involved in this remarkable root regeneration (in science, we rarely do), they did define some players required, and also suggested a few known genes that were unlikely to play a role.

Because of how quickly the cell repair occurs, they scientists suggested that recognition of changes in mechanical pressure, as opposed to genetic factors, might be responsible for the first recognition of lost cells. It’s been shown that leaves also recognise changes in pressure when attacked with lasers, so it’s possible that this regeneration cycle is not root specific.

Which means that it’s not just arabidopsis that’s better than you at fighting lasers. It’s probably all of the plants.

This article is based on the recent publication