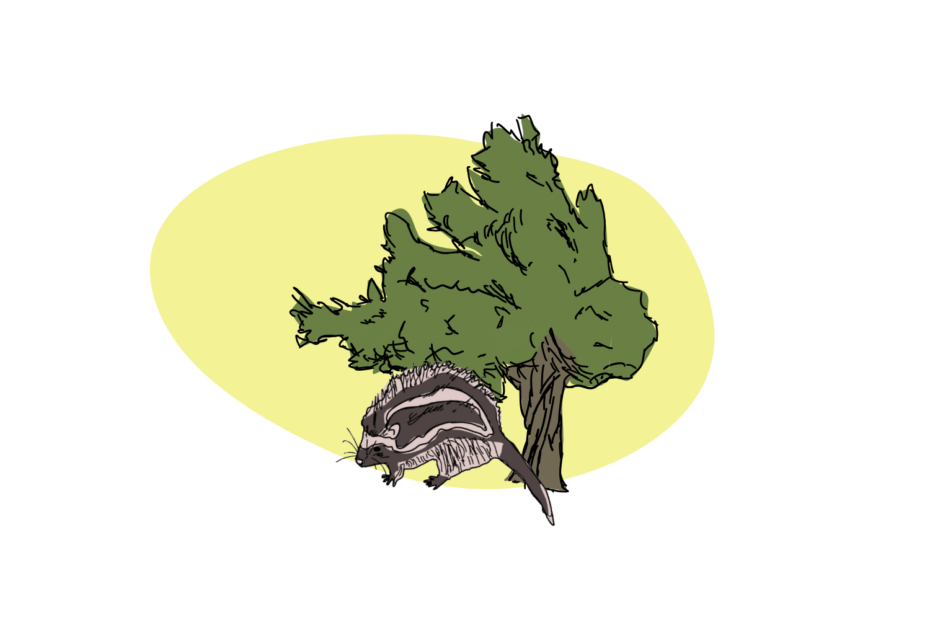 The crested rat chews the poison arrow plant, extracting a deadly plant poison that is then smeared on its fur for defence.

(Joram first mentioned the crested rat on our podcast).

The East African crested rat (Lophiomys imhausi) is technically a rat – a member of the Rotentia order and the Muridae (mouse) family. But to look at it, you’d think it was somewhere between a porcupine and one of those incredibly fluffy caterpillars.

It’s also somewhat cat-like, which is always a plus for us here at Plants and Pipettes. Recent reports suggest that the crested rat can purr, but it can also arch its back when threatened, sometimes simultaneously emitting ‘vocalizations’ to warn off would-be attackers.

Where the rat quickly diverges from cat territory is that its true defence doesn’t come from the sound or shape of the animal, nor from claws or fangs. Instead, the rat finds safety in its own fur, relying on specially adapted muscles that expose a  small strip of specialised hairs when the animal is under attack. These hairs, which have a unique microscopic honeycomb structure designed for absorbency, are filled with poison. Poison which can sicken, or even kill potential predators.

Poison or venom production is incredibly rare in mammals, with only a tiny handful of species able to produce their own poisons (big shoutout to male platypodes here). The crested rat is no real exception, preferring to ‘delegate’ the poison making process to a local plant species. This method of stealing from other (arguably more hard working) organisms is fairly well known in the animal kingdom, particularly amongst insects. Monarch caterpillars, for example, feed heavily on milkweed (Asclepias) species, granting themselves and their final butterfly forms with what is commonly called ‘unpalatability by appropriation’.

(Nonetheless,  most mammals shy away even from borrowing poisons. One of the few known examples beyond our terrifying rat involves hedgehogs (Erinaceus europeus) chewing poisonous parotid glands from toads and slathering the saliva mixture on their own spines.)

The pilfered poison of the crested rat is obtained by chewing on Acokanthera schimperi trees and then coating their fur with spiked saliva. While A. schimperi produces edible (if slightly bitter) fruits,  the bark, wood, roots and even unripened fruits contain high levels of poisonous compounds. In fact, the sap from A. schimperi trees has been used since at least the 3rd century BC as a form of arrow poison for hunting as well as warfare. Branches and leaves of the tree were boiled over fire, and arrows were dipped in the resulting tar-like brews. This usage gives both the common name of the A. schimperi tree – ‘African poison arrow tree’ – as well as the name of its major poisonous compound, ouabain (from the Soali ‘waabaayo’ meaning ‘arrow poison’).

In a 2011 study, scientists used Fourier transform infrared (FT-IR) spectroscopy – a method that allows identification of molecular structures based on the way they reflect light – to compare the compounds found in crested rat fur, with those found in the rat’s saliva as well as those found in the A. schimperi tree. They could confirm that the deadly properties of the fur could indeed be linked to the tree juices, and further showed that the poison in question was ouabain.

Ouabain itself is a sugary (glycoside) poison that can ultimately cause death by cardiac arrest, with milder symptoms including twitching of the neck and chest, respiratory distress, increased blood pressure and convulsions. (As an aside, defensive poison is rarely used with the aim of killing the predator – rather, the aim is to act as a teaching moment to discourage further attack). At the molecular level, ouabain binds firmly to, and therefore blocks the activity of important ion pumps, that move sodium and potassium in and out of cells. In a chain-reaction event, this blockage in turn limits the activity of another pump, which relies on sodium gradients to move calcium around. Ultimately, an increase in calcium within the cell leads to the heart cells contracting more often and less constantly, resulting in heart arrhythmia and even heart attack.

One puzzle still remaining is how the rat manages to survive a poison that is toxic to many of its mammal kin. In some instances, animals are simply willing to ‘take the hit’, allowing themselves to be a little poisoned in order to grant themselves ultimate protection, but scientists monitored rat activity following A. schimperi browsing and found no effect of the plant poisons on their feeding, movement or overall activity.

One hypothesis involves specialised salivary processing – the rat has unusually large saliva glands. However, given that it’s the poison laden saliva that’s smeared on the rat’s fur, it seems unlikely that the saliva itself would provide metabolic processes to inactivate the poison. Another hypothesis involves the highly compartmentalized stomach of the rat, which contains 5 anatomically discrete sections and is unique among the Muoidea super family.

A final hypothesis focuses on the molecular mechanisms, pointing to the fact that some invertebrates, as well as some muroid rodents, are more resistant to ouabain due to genetic alterations in the poison’s target. Changing just one amino acid at the precise location of the sodium-potassium pump where the ouabain normally binds (binding site), limits the ability of the poison to permanently link to, and block, the pump. Ultimately, it is unclear if the rat’s genome contains such a substitution, with further genetic work required to find out.

Overall, we’re fascinated by this feisty little rat, even if it is – like all of us – taking a lot of its best material from a plant. And let’s be honest, we’re also happy that this method of poisoning those who would pet it seems to be currently help by this single species.

Don’t let the cats find out!