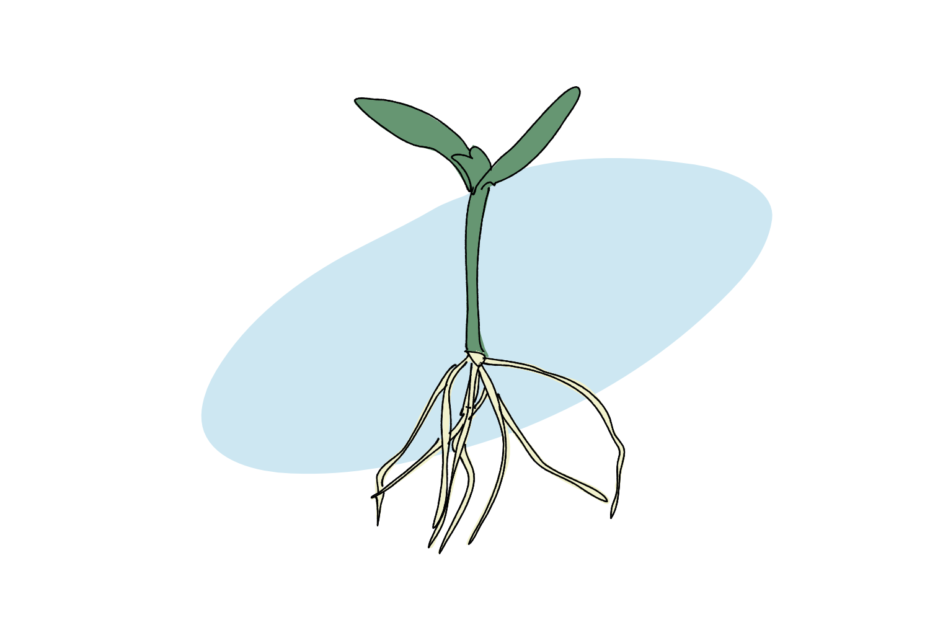 Observing plant growth relies in many ways on actually being able to see the plant parts you’re interested in. The aerial tissue, the bits growing above ground, are easy enough to view. It’s no issue to count leaves or fruit, describe the colour of a flower, or studiously note the branching architecture of the stems. But when it comes to the roots- those underground organs that have such an important role in defining the water and nutrients available to the organism, it gets a bit trickier.

Which is where See-through Soil comes in.

As with many aspects of experimental work, choosing how to grow you plants in the lab is a bit of a compromise. On the one hand, you can grow them in soil, a situation that more closely mimics real-world growth for most plants. Soil growth, however, comes with several drawbacks, including that it’s really hard to control water availability, nutrient concentration or the mechanical properties of the soil (hardness, granule size). Perhaps worst of all, you can’t really see what’s going on with the roots as they grow and develop. Although some labs have access to expensive medical-style imaging systems that allow them to essentially x-ray plant pots, the quick and dirty way to observe soil growth in roots still involves getting literally dirty. Removing the plants, and washing then looking at their roots. Which, it turns out, the plants don’t really like.

The alternative choice, is to use a transparent system- either aeroponics (roots dangle in the air and get sprayed with mist), hydroponics (roots submerged in liquid), or more commonly, agar or gels containing nutrient solutions.

These systems are much easier to control- you can add all kinds of things to the liquids or gels in controlled amounts. But they lack the important physical properties that make root growth in these systems comparable to that seen in a field experiment. Which is particularly problematic, if you are trying to observe root growth as an indicator of real-world success.

What researchers seek is a material with the best of both worlds. A substance that looks like agar, contains adaptable amounts of nutrients, chemicals and water but has the physical properties of soil.

Which is where ‘transparent soil’ comes into play. An idea that has been floating around in the subconscious (and later, in the literature) of scientists for some time now.

Apart from being transparent (to allow for root observation), the soil needs to be non-toxic, it needs to allow for water, air and nutrition to be supplied to the plant, and has to be strong enough to not collapse on its own weight. Recent work found an answer – called Nafion – which is a ‘sulfonated tetrafluoroethylene-based fluoropolymer-copolymer’, that can be made into soil-like mixtures. Although it works fine, it’s unfortunately also prohibitively expensive (1000USD/kg), must be chemically processed before being used, and doesn’t actually absorb water or nutrients required for the plants to grow .

Additionally, although the refractive index of Nafion is close to water, it’s not quite there. This is an important consideration, because the difference in refractive index between two substances or materials is what makes light bend around when it moves from one material into the next. For example, a jar full of tiny glass marbles is difficult to see through, even if each individual marble is perfectly clear, because the light is constantly zigzagging as it moves from air to marble, back to air and back to marble again. The case is different, however, if the marbles are melted into a huge block of glass. Suddenly, even if it’s the same thickness of glass that you’re staring through, it’s possible to see all the way to the bottom.

Adding water to the Nafion beads has roughly the same effect – instead of the light bouncing around tiny beads, it has to enter a ‘single’ block of water-bead substance, moving from light to water/bead (and bending) only once.

(If you, like me, feel like Joram’s picture is highly uninformative, feel free to check out this video which better explains how balls can become invisible when you pour water on them.)

The caveat is that the single-block effect only works if the water and the bead have the same refractive index, meaning they are the same ‘density’ and therefore make light bend through them in the same way. And unfortunately, with Nafion, it’s close but not quite there. The Nafion is a bit too ‘dense’, so the water has to be beefed up with sorbitol, which changes its refractive index in the right way, but also causes osmotic stress (which is similar to drought stress) in plant roots.

Which means, that although we’re grateful to Nafion, it might be time for a new player.

Recently, Ma and colleagues produced a new ‘hydrogel’ soil substance that is porous, can contain water and nutrients, is transparent, and can be produced simply, rapidly and inexpensively. The new Transparent Soil.

It’s produced by rapidly dropping a mixture of gellan gum and alginate into a magnesium chloride solution so that it forms tiny spherical gel droplets. Both alginate and gellan are already used for plant growth, but alginate, which solidifies rapidly, is both weak and coloured, while gellan, the colourless and stronger substance, solidifies more slowly. Mixing the two, in a 1:4 ratio, makes a perfect solution. In fact, the relative ratios can be altered depending on the desired hardness of the see-through soil, but 1:4 gives a transparent 20x20x20 cm ‘pot’ of gel, that is strong enough to hold up its own weight.

As with the Nafion, the beads are clear, but not completely see-through until flooded with liquid. But in this case a quick ‘rainfall’ of water or nutrient media allows growing plant roots to be nearly perfectly imaged by photography or microscopy. If you want to really help your roots keep that underground feeling, you can even use near-infrared illumination, which is mostly invisible to plants, whenever you want to look at the roots.

In order to test if their creatively clear soil was earthy enough to trick the plants, Ma and colleagues grew some soy in the transparent earth. The plants had similar root and shoot biomass, root to shoot ratio, total root length, root surface area and secondary root number and density to brown-soil-grown plants (only root diameter was slightly different). By looking at the expression of a small handful of genes, they also suggested that the plants weren’t particularly stressed compared to brown-soil-grown, and even found that the plant roots were less oxygen stressed than hydroponically grown plants.

To show the adaptability of their new soil, the scientists changed the hardness of the gel, the size of the particles (possible within a range of 0.5-5mm), the water availability within the soil, and even monitored the pH near the roots by addition of a colour-changing pH indicator. Finally, they showed that their soil was compatible with in vivo microscopy – used for live imaging of the plant roots.

All in all, it looks like a promising concept, and one that might be accessible enough to move into many labs in the near future.

The transparent soil might be an important tool in allowing rapid, cheap and large-scale root phenotyping to be undertaken in a non-destructive way. Which, given that root attributes are increasingly being explored as possible predictors of crop performance, might be a real win for the scientific community.