The Greatest Protein on Earth 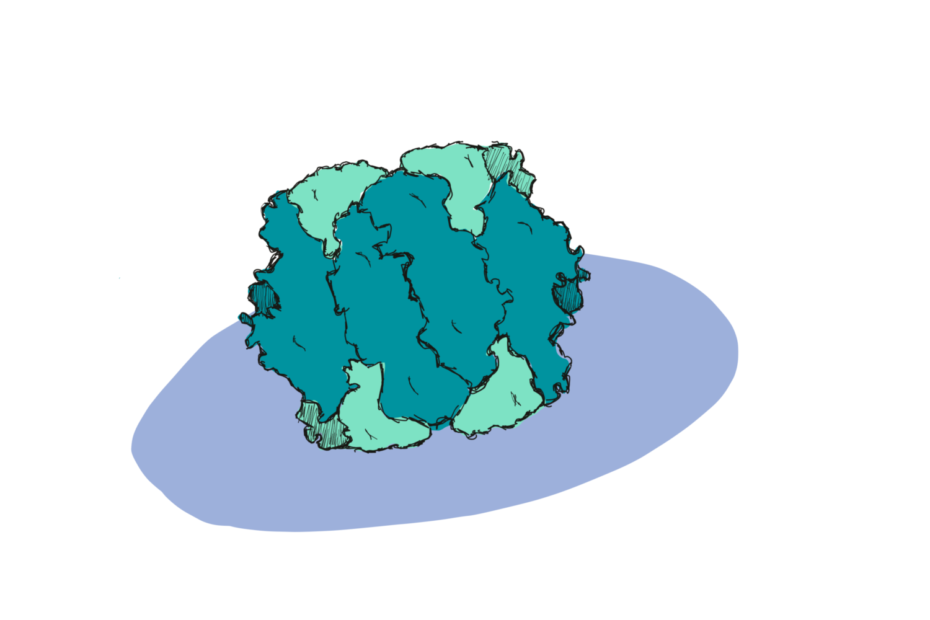 RuBisCO is probably the most abundant protein complex on the planet. It’s a major player in photosynthesis: responsible for taking carbon dioxide and fixing it into a human-consumable carbon source (sugars!), and in doing so helping to make the oxygen we breathe, and helping our plant friends grow. So RuBisCO is at the centre of nearly everything that we breathe and eat eat, dress in, wear and build our homes with. We think you might agree with us that RuBisCO is indeed The Greatest Protein On Earth.

Do you know Bonnie Tyler’s ‘Total Eclipse of the heart?’

If you do, feel free to sing along with us. And if you don’t, take this as a public service announcement and go and fix this problem in your life right now. Total Eclipse is truly one of the greatest songs of all time and the video is filled with 80s magic.

Let’s break it down shall we?

RuBisCO, every now and then it takes some RuBP and fixes in some CO2

RuBisCO is a protein complex with the ridiculously long full name of Ribulose-1,5-bisphosphate carboxylase/oxygenase. It’s an enzyme – in charge of ‘doing things’ in the cells, that hangs around in the chloroplast participating in photosynthesis. RuBisCO’s role is to take some carbon dioxide and smash it in with an organic compound that’s 5 carbons long (RuBP a.k.a Ribulose-1,5-bisphosphate). This results in the formation of two 3-carbon long compounds (phosphoglycerate): products that can then be turned into tasty tasty sugars for animal consumption (and for use in cellular respiration).

This might sound simple, but we animals can’t do what plants (and algae can) – we can’t ‘fix’ inorganic carbon (carbon dioxide) into something usable. So the RuBisCOs of the world are responsible for making nearly everything we eat. Overall, RuBisCO is also a major player in plant photosynthesis, a process that not only gives us sugars, but also oxygen!

RuBisCO, every now and then some oxygen can jump in, and that leads to photorespiration

So here’s the bad. Although RuBisCO is amazing at grabbing carbon dioxide and pulling it into organic carbon molecules… sometimes it gets confused. Every now and then, approximately 1 in 4 times, it accidentally grabs some oxygen instead. The result of this reaction, is a toxic byproduct, phosphoglycolate, which must be detoxified in a process known as photorespiration. Photorespiration takes a lot of work: it involves metabolic processes in two separate cellular subcompartments (the mitochondria and peroxisome), uses cellular energy (ATP), and also results in a loss of carbon.

RuBisCO, every now and then I get a little bit nervous that we need you for our food supply

Mistaking oxygen for carbon dioxide both means that less carbon is fixed (less sugar!), and that the plant has to use up energy and resources fixing the toxic mess. For humans, this means less plant products (fruit, grains, timber).

But growing human population, coupled with increasing pressures from man-made problems like global climate change and land degradation, mean that getting plant products, particularly food, is one of the biggest issues facing the human population in the coming years.

RuBisCO, every now and then a scientist comes along and thinks: ‘We can improve you if we just try!’

Back in the 50s, massive breeding programs worked to improve the quality of crops and both the quality and quantity of their produce. For example, shorter plant varieties were developed, as these individuals spend less energy on growing tall (and put more energy into making grains), don’t lodge (falling over and ruining your own seeds), and are easier to harvest with machines (they are all the same height).

This was ‘the green revolution’, and scientists suspect that nearly all of our major crops have now been optimizied in nearly every way.

With one pretty big exception: the rate at which they fix carbon. Which brings us back to RuBisCO. It seems possible that making RuBisCO faster, or better at recognising carbon dioxide, or doing several other sneaky fixes, will give plants more energy and help humans fight against the famines of the future.

We’ll discuss some of these attempts, and some of the natural adaptation that certain plant species have come up with their own, in following weeks on the blog.

Until then, let’s hit that verse one more time on the way out. Feel free to sing along!

Want to read more about RubisCO? Come back next week. Or, for now, check out these reviews:

5 thoughts on “The Greatest Protein on Earth”