The plant that hides from human eyes 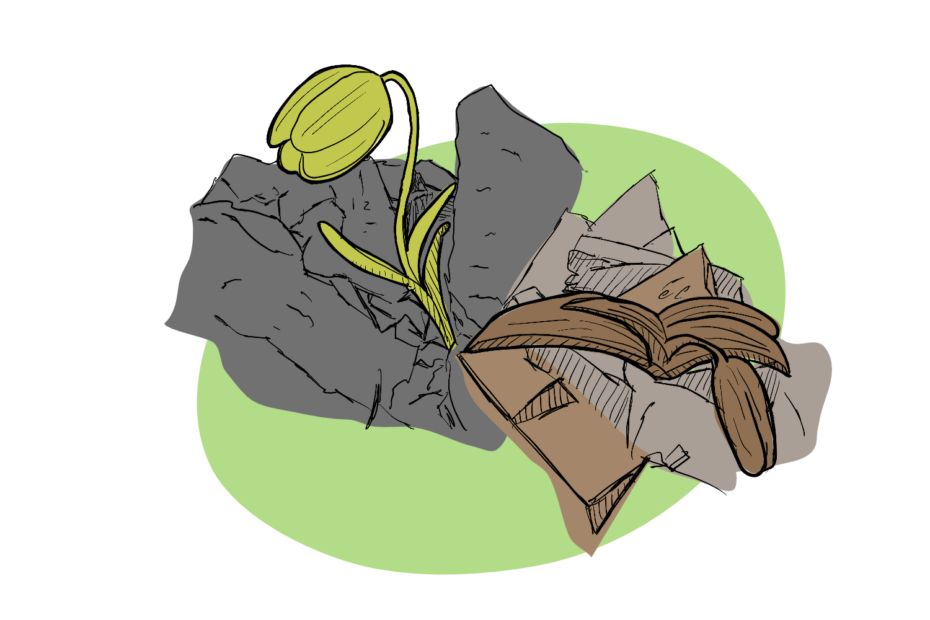 Intense commercial harvesting of the alpine plant Fritillaria delavayi, which is used in traditional chinese medicine, may be driving the selection of duller, more camouflaged plants.

High up in the Hengduan mountains of southwest China, grows a perennial herb Fritillaria delavayi. F. delavayi grows slowly, spending the early years of its life producing leaves, and flowering only after five years of growth, after which it produces just a single flower every summer.

The flowers, which resemble small bent tulips, and range from yellow to browny grey, are not overly beautiful. But the value of F. delavayi is not in its beauty but in its bulb, which has been used in Chinese traditional medicine for over 2000 years. In recent years, however, demand for the bulb has increased, leading to increased harvesting pressure on the plant.

In a recent report, Yang Niu, Martin Stevens, Hang Sun investigated the natural colour variation of the plant, which includes both the floral diversity and leaves that range from green to brown to grey. They measured the colour of leaves as well as the colour of the rocky background against which the plants grew, and found a strong tendency for leaf colours to match their native rock backgrounds. This bias suggests that the location of certain individuals is not random, but rather selected for greater plant camoflauge.

Although plant camouflage as a defensive strategy to avoid herbivory is well established, there are no known herbivores of F. delavayi in the mountain regions. In fact, the species contains high amounts of chemical alkaloid defences, which, ironically, are the very same compounds that lead to its medicinal value. So the scientists suspected that humans hands were acting as selective pressure, and set out to test their theory.

They estimated the collection intensity on the plant population by calculating the total collected weight of the bulbs, divided by the relative abundance in the corresponding locations, and found a strong negative relationship between intensity and the colour difference between the plant and its habitat. This indicates that plants that blend in are less likely to be picked. Furthermore, the scientists found that plants that were in habitats that made harvesting harder (i.e., growing at greater depth or under rockier substrates), were less likely to need to hide.

To further test the prediction that the plants camouflage was linked to human detection, the scientists turned to citizen science. They developed an online ‘spot the plant’ experiment, which involved asking humans to locate their plant prey as rapidly as possible under different conditions. Perhaps unsurprisingly, better camouflaged plants took longer to find.

Overall, the results show that the colour of F. delavayi varies among population, and is more likely to match the background in areas of high harvest pressure. This suggests that humans have driven selection of plant colour in the species. Given that plant floral and leaf colours often arise for various functional reasons, it will be interesting to understand if the changing colour trends are having any adverse effects on individuals or populations. Furthermore, given that humans have been hunting and collecting in increasing intensity for many millenia, it is expected that many other examples of human-driven changes are still out there waiting to be found… or not.