Twice As Bright as Sunlight 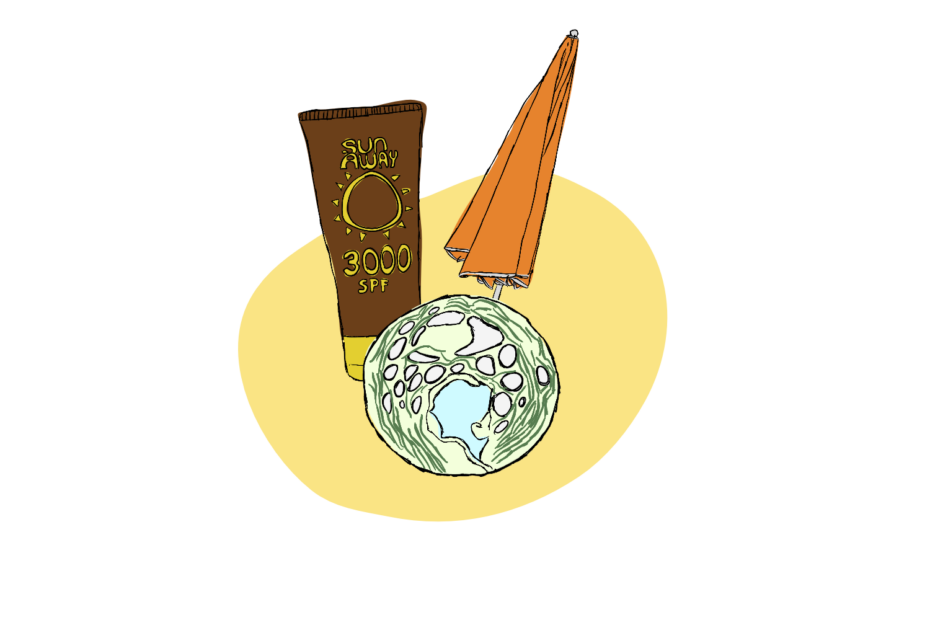 In 2013, a new species of algae emerged from the sand crusts of Israel’s Negev desert (or, that is to say, the existence of the species was published).  In an environment where the sunlight beats down with fierce intensity, where temperatures reach 60 degrees on a hot summer’s day yet plunge to subfreezing on winter’s night, and where water comes and goes in quick succession, few species can survive. Yet a mix of desert extremophiles make their home where others would perish.

One of these is the alga Chlorella ohadii.

The alga was isolated from the biological sand crust, a mixed community of fungi, algae, lichen and bacteria that cling to each other on the top of the desert, stabilizing the shifting sands and surviving through some of the harshest conditions on earth. From the earliest days of its discovery, it was clear that Chlorella ohadii was something special.  For one thing, when it comes to growing, C. ohadii is fast – perhaps even the fastest of all photosynthetic eukaryotes. When grown under optimal conditions, the algae can double itself in as little as 1.5-2.0 hours, three times shorter than that of model alga Chlamdyomonas reinhardtii.

Perhaps even more amazing is C. ohadii’s ability to shine even under the harshest of spotlights. Although plants and algae need light to survive, too much of a good thing always leads to trouble: high light can damage the photosynthetic apparatus and bleach the cell. Yet while C. ohadii’s cousin alga C. sorokiniana was understandably paled by growth under light intensities that doubled that of full sunlight, C. ohadii seemed unaffected by such luminous blasts. A look inside its chloroplasts revealed that the known ‘weak link’ of the photosynthetic chain under highlight – the D1 protein – remained mostly undamaged. Further work suggested that the alga uses a mixed bag of ingenious tricks to avoid high light damage, including structural, compositional and physiological acrobatics.

In order to understand these tricks, Treves and colleagues used a systems biology approach. While scientists will often focus on changes that happen with individual genes or proteins under certain conditions, the purpose of systems biology is, instead, to take a holistic view – understanding how the organism as a whole responds at multiple, interconnected levels.

Here, the scientists analysed the changes in C. ohadii  transcript levels (mRNA), protein modifications (redox associated changes), metabolites and lipids when the alga was subjected to a sudden thirty fold increase in light exposure. These data were then combined with measurements of growth, photosynthesis and respiration, total protein content, and observations of the changing morphology of the cells. Because all of these changes can occur at different time scales – and within an organism that itself is dividing every two hours – choosing the right times at which to look for the changes was itself a large part of the struggle:

The main challenge, except for integrating [these] giant datasets into separately “wrapped” biological stories, was to capture informative sampling time points in a cell with generation time of 2 hours, and response time to stimuli of seconds to very few minutes. This meant, for example, analyzing redox of the proteome only 3 min after a light treatment and gene expression only 15 min after.

By utilizing this incredibly detailed systems biology approach, Treves and colleagues were able to get a firm grasp on the multifaceted responses of the algae to light changes. Some of these changes were expected. For example, the switch to high light triggered the expression of transcripts associated with light stress, and those associated with repairing DNA from (high light) damage. And metabolites associated with hard times – including the ‘stress’ responsive proline, and the antioxidant ascorbate (Vitamin C), were also rapidly pumped out when the lights got brighter.

But other responses were less expected. For example, a proxy readout for how much light stress the chloroplast is feeling under a given conditions suggested that the algae had lower stress in high light conditions. This is likely because the switch to high light stimulates stress protective mechanisms, but, as these are so incredibly effective in C. ohadii, the high light algae ends safer than before, despite the higher stress.

the metabolic/enzymatic handling of [stress] under high light is overshooting and is also so efficient that, paradoxically, the cells “feel” or “count” less pressure in high light.

This finding, coupled with other observations, revealed a clear fact about the algae: C. ohadii is ALWAYS high light ready.

Within just a few minutes the alga can increase its photosynthetic capacity and its growth rate – with the latter undergoing a 15-fold increase within the first 40 minutes of high light. These changes occur well before the cell has the chance to make new proteins, and likely rely on rapid post-translational responses (protein modifications) that occur within seconds to minutes.

I guess it would be that we focused on “responses/changes” because as biologists that’s how we’re programmed to think – stress leads to response to stress.., but this alga knows better. Even before encountering stress, she (sorry, she’s my gal..) is equipped and ready in terms of enzymatic/metabolic capacity to make use of 30-fold higher energy input, in case it presents itself.

Constantly maintaining this surplus metabolic and growth capacity is a costly thing to do. But, as Treves points out, it’s likely very important, even vital, if you live on a dune in the desert. The near-immediate response of C. ohadii, not only allows it to take full advantage of the sunlight energy when it appears, but also prevents the algae from being destroyed by the excess rays, and therefore meeting the same bleached fate that would befall its non-extremophile cousins.

The scientists are now following up on another feature of C. ohadii – it’s remarkably rapid growth rate. They want to better understand how this amazing alga somehow manages to avoid the metabolic bottlenecks that slow down all the other photosynthesising eukaryotes. This growth rate, along with the ability for the algae to survive light, can be beneficial for improvement of bioreactor-based technologies as well as for our understanding and improvement of plant processes and responses. The fact that it was discovered in the harshest of environments acts as a constant reminder of the wonders of the world around us, and the need to conserve and protect the biodiversity around us.

Disclaimer – we know the people involved in the study and used to work with them.

2 thoughts on “Twice As Bright as Sunlight”