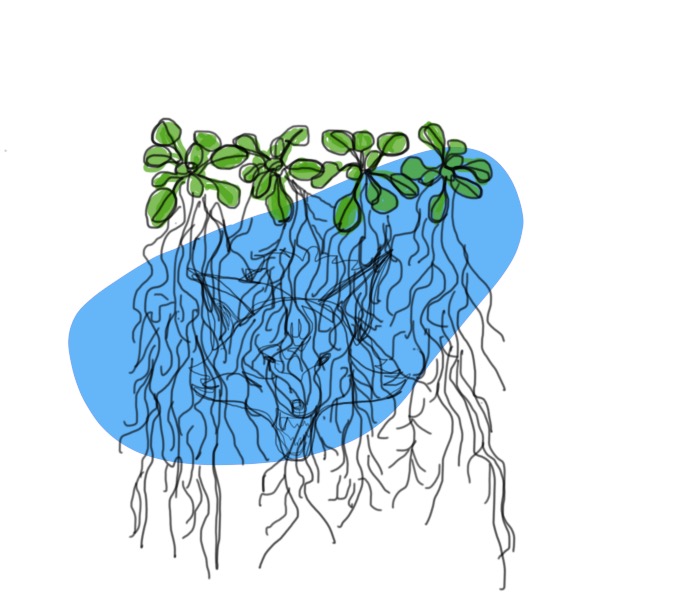 This werewolf didn’t come into being like the werewolves of other stories do. There wasn’t a bite, a fever, or rapidly sprouting knuckle-hairs. There wasn’t a dark night or a full moon or the howling call of the wild.

But there were scientists. And there may have been some mutagenic substances.

Once upon a time, in what may have been a dark and stormy night, but might also have been a pleasant spring morning in a well lit laboratory, some scientists treated Arabidopsis with EMS.

EMS, also known as ethyl methanosulfonate, is a mutagenic, teratogenic (it disrupts foetal development), and probably carcinogenic chemical. Scientists have used the chemical for years to deliberately cause mutations in the DNA of the organism they’re studying. Unlike more modern technology, like CRISPR/Cas9, the mutations occur fairly randomly, as opposed to at a certain gene position. So CRISPR/Cas9 systems can be used to deliberately alter a certain (known) gene. But random mutagenesis by EMS or other methods, involves first mutating, then searching for a phenotype… and then working out which gene you mutated in the first part.

By the way, these two ways of understanding gene function have scientific names. Working from phenotype back to gene is called forward genetics (you’re going towards the gene), while altering a gene and then looking at the consequences is called reverse genetics.

Anyway, on that dark-and-stormy-or-mild-and-sunny night/day, a couple of scientists looked at some EMS-mutagenised Arabidopsis and found some plants with bizarrely hairy roots.

Werewolf was first discovered in 1999 (Lee and Schiefelbein). These days, finding the mutation causing the furry phenotype could be undertaken relatively rapidly using sequencing techniques. But back in the day, forward genetics involved a lot of time and a lot of crossing to even work out approximately where on the genome the gene-of interest was. That was followed by placing smaller and smaller ‘chunks’ of un-mutated DNA into the mutant (werewolf), to narrow it down further to an individual gene. After a whole lot of work, the scientists had it down to a single gene. A gene they called Werewolf.

Beyond the fantastically fluffy root phenotype and amazing name, Werewolf is a very useful mutant in helping scientists understand how root hairs develop. And root hairs are incredibly important to plants. They’re created to absorb water and vital nutrients like nitrogen and phosophorous, and are designed with a huge surface area to help aid the soil-to-plant (and vice versa) transfer!

But root hairs don’t just pop up everywhere. Probably because they require energy to grow, and because having every cell make a hair will simply crowd the soil and defeat that whole ‘increased surface area’ plan, there has to be a balance.

So plants like Arabidopsis, have certain developmental programming that defines where the root hairs grow. This programming defines where on they root they will be (not at the very tip), and, in places that do have hairs, which of the many cells will become a hairy root cell, and which will not.

In general, scientists noticed a kind of rule. Cells in outer epidermis that are snuggling against just one internal cortex cell don’t become hairs. Epidermal cells that are located where two cortex cells come together do make hairs. The positions were named ‘N’ (no hair) and ‘H’, respectively.

In the werewolf mutant, hairs were popping up all over the place- 90% of ‘N’ position cells had hair, compared with less than 5% in the wild type.

Normally, it’s expressed in N cells, and acts to prevent root hair growth by promoting the expression of genes like GLABRA, that in turn actively inhibit the hair growth. How it does that- the parts of the WEREWOLF protein that are involved in making those interactions- have recently been investigated further by the WEREWOLF-creators themselves.

In the end, it comes down to a cool mutant and a simple- by biological standards at least- mechanism! It may not be the terrifying or sexy werewolves (can we talk about why that is even a thing?) that we’re used to, but it’s still one of the coolest in our books. Except for Oz from Buffy. He was pretty much the best.

By the way, did you notice the wolf in in the header image?