What happens when you put a plant in the dark? 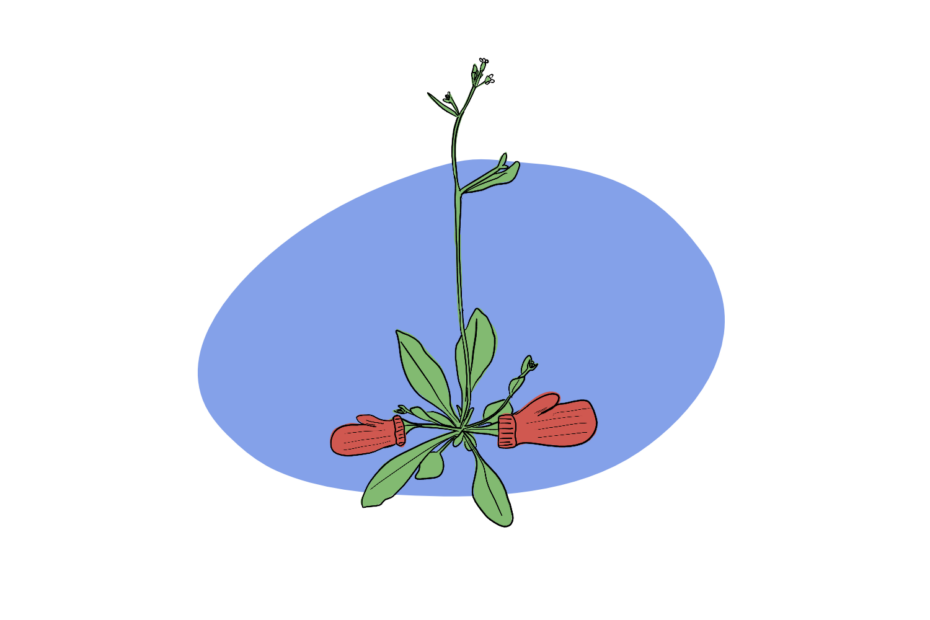 Plants rely on light to survive- without it, they can’t photosynthesise. Of course, like us, plants are used to normal light-dark cycles. But what happens when the lights just don’t come back on?

Back in the early noughties, scientists Michael Weaver and Richard Amasino took it upon themselves to answer the question ‘what happens when plants are put in the dark’.

It was already known in the plant field that dark treatment could induce aging processes – known as senescence – in detached plant leaves. So for some time, scientists had been ripping leaves off plants and placing them in darkness as an experimental system to study leaf senescence.

Plant senescence is a pretty important topic, that goes beyond pretty autumn colours and dead house plants. Many crop species are grown as annuals, which means that they set seed (food for us!) and then die. The longer the plant leaves stay green (i.e., the later they senesce), the more they can photosynthesise, meaning more energy produced to put into the seed/crop. Aside from that, the process of leaf senescence in these crops involves more than just leaf death. Instead, it’s a carefully orchestrated recycling process, which involves proteins, fats and other macromolecules being broken down in the leaves so that they can be shipped to other, developing parts of the plant (hint: the seed).

So understanding senescence is important, and, with their ‘dark detached leaf’ system, scientists had a way to study the process. By and large, the system worked. The leaves turned yellow and then brown: they senesced, and they could be studied. Unfortunately, detached leaves can’t really expected to behave like whole living plants, so Weaver, Amasino and colleagues tried placing whole plants in darkness instead. The problem is, the plants just… didn’t die.

In a simple experiment designed to understand this disparity, the scientists placed whole plants in darkness, and also darkened individual leaves, to see what was going on. The key feature, is that instead of detatching the individual leaves, they darkened them using ‘cloth mittens’

After 2 or 5 days of darkness, the whole plants hadn’t undergone any of the normal signs of senescence. They hadn’t lost a lot of chlorophyll, and hadn’t really started mass ‘recycling’ their proteins. Specific proteins associated with photosynthesis were still hanging around, and genes known to be associated with senescence (SAGs, for Senescence Associated Genes) hadn’t been induced. The plants had induced a gene known to be dark-responsive, suggesting that they did know they were experiencing a bizarrely long night. They had just chosen not to panic about it (i.e. senesce).

By contrast, the individual mitten-wearing leaves were showing all of the signs of senescence: yellowing, loss of chlorophyll, loss or protein, induction of SAGs. Interestingly, this process seemed to be proceeding faster in older leaves, compared with younger leaves.

The scientists also ran a couple of all-important controls. For example, they placed the mitten-wearing leaf plants into the darkness, thus showing – when the mitten-leaves did not senesce, that it wasn’t the presence of the mitten itself, but rather the overall plant-dark relationship, that was causing the senescence. They also rubbed vaseline on the leaves, in case the senescnce was linked instead to transpiration (it wasn’t), and finally covered the leaves with ‘clear mittens’ (no darkness led to no senescence).

After the darkness, the plants and mittened leaves were returned to light, and their progress was followed further. While the now un-mittened leaves continued to senesce, the fully-darkened plants remained green, and in fact ultimately senesced slower than plants that were kept in the light the whole time.

Darkening whole plants not didn’t induce senescence, it actually delayed it. Further experimentation from the scientists suggests that this is simply because the plant’s entire development was delayed in darkness, so when it emerged back to the light it was effectively younger than its light-grown plant pals. Kind of like a really low-tech version of deep sleep.

In another suspiciously-low-tech but actually-completely-cool step, the scientists conducted an additional experiment which involved their plants once again wearing mittens, but this time, mittens with a hole in them. After several days, the mittened leaves had once again turned yellow, except for the small part of the leaf directly under the hole. Thus, the experiment reveals that leaf senescence is highly specific, targetted not just to an individual mittened leaf, but to local sections (and possibly even individual cells) within that leaf!

The response revealed by Weaver and Amasino’s work makes a lot of sense from the point of view of the plant itself. If a single leaf is persistently darkened – for example it lies in the shade of another tree- it makes more sense to recycle that leaf, so that the nutrients can be used for new growth. By contrast, if a whole plant is placed in the dark, the best thing to do is sit and wait, in the hope that good times will come once again. (We want to quickly note that there’s another response to darkness, which involves a whole lot of rapid elongations in order to ‘search for the sun’. But that’s a story for another time).

Overall, it’s not really surprising that plants know how to ‘pause and wait’. Although it varies from species to species and habitat to habitat, most plants go through times where at least one of the things they need to grow is limiting. For some, that might be light (hi there arctic plant species), for others, that’s water (looking at you, desert shrubs). Because they aren’t able to simply get up and go when times get rough, being patient is one of the defining characteristics of our plant friends.

*Note that this references is now nearly 20 yeas old.