When this tree is stressed, it becomes female 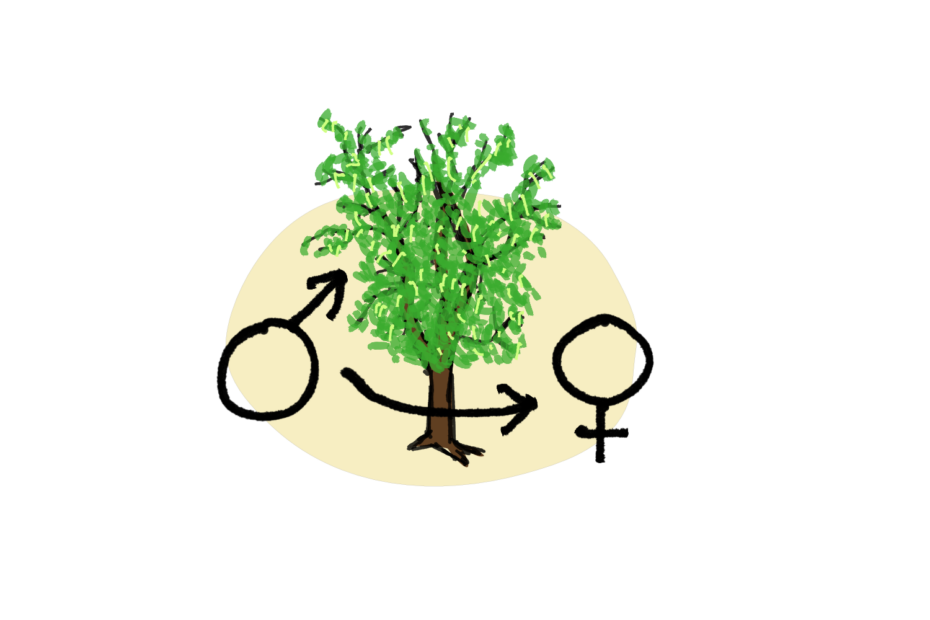 We all have different strategies to deal with stress. Some resort to excessive day-sleeping, others, like me, empty their sweets cupboard. For the striped maple, the response is even more extreme: when stress becomes too high, it changes its sex to female.

The definition of sex thrown around in the animal world often tends to be outrageously basic: there are two sexes, female and male, as defined by the presence of certain sexual organs and the absence of others. While this dated definition is already pretty problematic when talking about birds and bees, when we talk about plants, things get even trickier.

Generally, when we think of an average flowering plant- sunflower, poppy, daffodil- we’re not thinking of species that like to keeps their male parts in one individual and their female parts in another (known as being dioecious). Instead, many of these plants, including our beloved Arabidopsis, have both male bits (pollen) and female bits (ovules), not just in the same plant, but in a single flower. They’re hermaphroditic, also known as monoecious.

Having said all that, there are plants out there where individuals have just one or the other sex, like ginkgos. And for some plant, physically separating the sexes means keeping them on different branches of the same plant (some birch trees)

It can get even more complicated than that. Certain plants start with one sex and during their lifetime transition into the other. One of the triggers for the transition can be the size of a plant. For example, Arisaema triphyllum, also known as bog onion, or- much more nobly- as ‘brown dragon’ is male when it‘s small. When it gets a bit bigger, it has both male and female flowers, and finally, it becomes fully female once it‘s grown to its final size. In other plants, environmental factors can trigger the sex change.

This is a tangent, but I can‘t not mention when talking about sex change: plants are by far not the only sex-changing organisms. Some fish and gastropods do so as well, and a very prominent example are clownfish. In a clownfish community, the largest fish is female, the second largest is male and only these two get to breed. All others are smaller, immature males. If the female dies, that second largest male fish switches to being the new female, and all of the other males move up one position. Which, as others have noted before, gives a whole new story than what we saw in ‘Finding Nemo’!

Another sex-changing plant species is the striped maple (Acer pensylvanicum). In the wild, the average population of striped maples is made up of about 3 parts male trees and 1 part female trees. Researchers have previously observed that male plants can transition to female sex plants with an intermediate stage of having both male and female flowers. Now, Lena Struwe and Jennifer Blake-Mahmud investigated the possible reasons that might trigger this transition.

The two researchers selected a couple of comparable male, female and intermediate trees in a natural forest and subjected them to a range of stresses. Ranked from mild to severe, the stresses included: hydraulic disruption (cutting 50% of the phloem), partial defoliation (removing half of the leaves), full defoliation, and aggressive pruning of the crown (removing all the tips of the branches that contain the stem cells to grow).

They then tracked each tree over subsequent months, to observe whether it would stay the same sex, transition partially, transition fully, or die.

The three less severe treatments had no significant effect on whether trees stayed male, female or intermediate trees. But the severely stressed pruned trees responded differently. Trees that were female at the beginning of the experiment turned out to be much less robust and would die rather frequently, especially under the most severe stress of pruning. Furthermore, male trees that were pruned either became intermediate male-female hybrid trees, or switched fully to female over the course of the next two years.

So, extremely stressed male trees turn female – if they survive. Jennifer Blake-Mahmud and Lena Struwe could only speculate on the exact reasons, but their working hypothesis is as follows. Female trees are less robust and therefore it is advantageous for the species to start their existence as males. However, if times look particularly tough – for example if a deer heavily nibbles on a tree- the tree quickly puts all his efforts into becoming female. This may be because, in a population saturated in males, becoming female guarantees a possibility for quick and easy sexual exchange with many mates. So, although being female means being more vulnerable, it also provides the best way to pass genes on to the next generation before the possible death.

Interestingly, while striped maple switches to female when times get particularly rough, other species can make the opposite switch. This may occur for various reasons. For example, it could be argued that becoming male creates an easy way to export your genetic material long distances, away from local stresses: pollen can be carried many miles away from the parent plant.

More generally, the urge to pass the genes on when stressed is very common. Laboratory stress experiments on Arabidopsis can trigger bolting and flowering, as the plant attempts to quickly make seeds that might better survive (or wait out) the current onslaught.

If you like to know more, we also talked about this paper on our podcast.

1 thought on “When this tree is stressed, it becomes female”