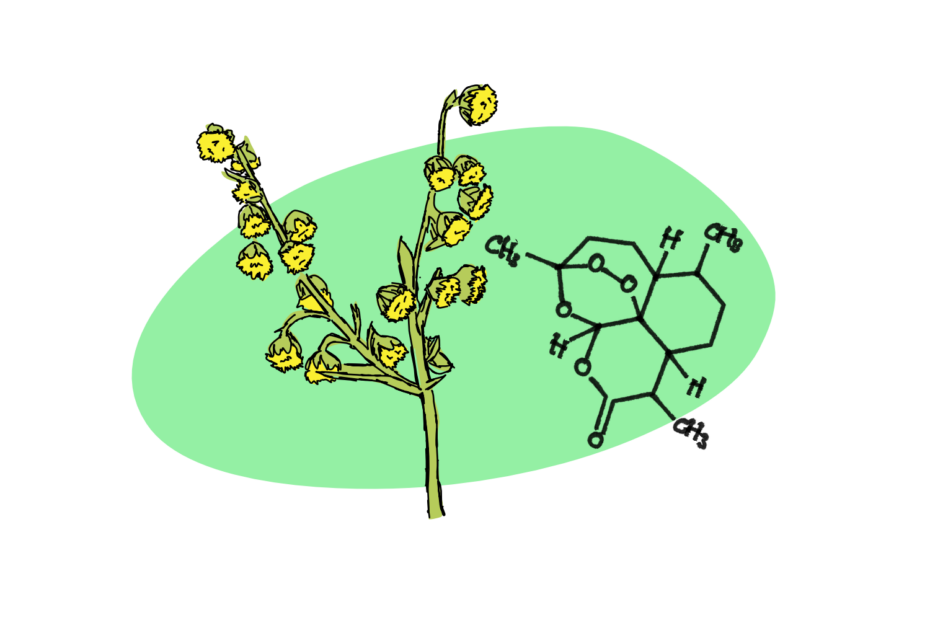 Malaria is a mosquito-borne infectious disease that affects hundreds of millions of people each year, and kills over 500,000. Worldwide, the chosen treatment for malaria is artemisinin combination therapy (ACT), a medicine that relies on the drug artemisinin that happens to come from a plant…

This is the second part of our new series looking at modern medicines with active ingredients that originally come from plants. You can read the first part, about the cancer-fighting paclitaxel, over here.

Malaria is a horrific disease, that is spread throughout the world by female Anopheles mosquitoes. The sickness itself – which can start with symptoms of mild fever and chills and then turn to severe anaemia, respiratory distress, multi organ failure and ultimately death – is not the fault of the bug. Instead, it is due to a small eukaryote, Plasmodium, a parasite that infects mosquitoes, and that also infects humans.

A total of five different Plasmodium species can cause malaria, with P. falciparum the main culprit in many highly affected African and Asian countries (Nigeria, the Democratic Republic of the Congo, Mozambique, Uganda and India) and and P. vivax the dominant species in the Americas.

In 2017, there were 219 million cases of malaria, and nearly half a million deaths. Currently, approximately half of the world’s population is under threat of malaria, with those most at risk including children under 5 years of age. In 2017, children accounted for 61 % of all malaria deaths.

Malaria can be prevented – by control of the mosquito vector and personal protection using sprays and nets. And it can be treated. To date, the best available treatment, is artemisinin-based combination therapy.

Artemisinin is a C15 isoprenoid (i.e., a chemical compound, see image above for details), that is naturally produced in the wild plant Artemisia annua (aka sweet wormwood).

A. annua doesn’t store artemisnin throughout the plant, but rather keeps the chemical packed away in ‘glandular trichomes’ – small liquid-filled sacks that cover its leaves. It’s a bit unclear to scientists why A. annua even goes to the trouble of making artemisinin in the first place, but it is known that as the plant ages, the sacks tend to burst and the chemical leaks across the leaf and ultimately into the surrounding soil. So possible functions of artemisinin for the plant include various defences against biotic stresses – with the most promising idea being a role in preventing other plants from setting up shop nearby – a process called allelopathy.

The role of artemisinin in malaria treatment was discovered in the 70s by Tu Youyou, a Chinese scientists who ultimately won the 2015 Nobel prize in Medicine for her discovery. The discovery took place as part of ‘Project 523’, a secret military programme that involved screening plants to search for malaria treatments, that were urgently required for the Vietnam war. In fact, sweet wormwood had been used by Chinese herbalists for more than 2000 years, with antimalarial applications described as early as the 4th century. And the cold-water extraction method that Tu Youyou described for the drug, known as qinghaosu in Chinese, was influenced on writings from 340 CE!

Despite the scepticism that initially met the publication of artemisinin’s effects (the drug seemed too unstable to be effective), artemisinin has been shown to work against a broader range of Plasmodium parasite life cycles than other traditional anti-malarials like quinine, and is now the favoured treatment method across the world. The exact mechanism – how the drug actually kills the parasite – remains somewhat unclear, but it seems to involve a rare endoperoxide bridge found on the molecules. This is the -O-O- bridge spanning the top left hexagon in the molecular structure.

In order to provide the world with artemisinin, A. annua seedlings are grown in nurseries, and then matured in fields for about 8 months to reach full size. The plants are then harvested, dried, and the chemical extracted. The generally low accumulation of artemisinin in sweet wormwood, its sometimes unstable supply and consequent fluctuation in market price have created demand for the development of synthetic production methods. The most efficient involves production of artemisinic acid, the immediate precursor to artemisinin, in yeast, followed by cheap chemical conversion to artemisinin itself. Recently, the production of artemisinic acid has also been shown to be possible in the biomass crop plant, tobacco.

Before there was artemisinin, malaria parasites were treated with other medicines, including chloroquine and sulfadoxine-pyrimethamine. But in the 50s and 60s, Plasmodium began to develop resistance to these treatments. In 2006, the World Health Organisation (WHO) called a halt to single drug use of artemisinin. Instead, it can only be used in combination with other drugs (artemisinin combination treatment), a move that works to reduce the chance or resistance once again developing.

Unfortunately, artemisinin-resistance has nonetheless appeared in the Greater Mekong Subregion (Thailand, Cambodia, Lao, Vietnam, Myanmar). WHO has since launched several strategies to fight the resistance, and to eliminate malaria entirely in the region. And around the world, several scientific groups are at work to find new medicines, or new methods, that can bring malaria down once and for all.

Shoutout to my beloved friend PFT, who inspired this series through her own work on production of artemisinin in tobacco:

*Disclaimer: We know and like the people involved in this work.