How the Leaf got its Shape 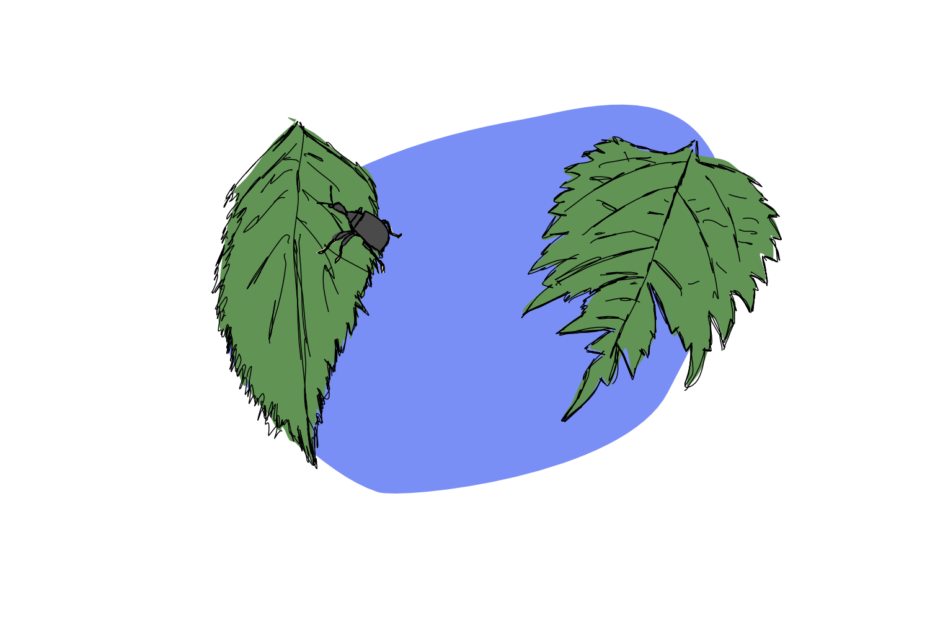 Leaves begin their lives as a tiny rounded ‘peg’- an outgrowth of a cluster of just a few cells. Yet as they grow, they develop not only in size, but also in shape. The result: a huge and beautiful diversity of foliage structures, with differences seen from species to species, within a single plant as it ages, or in response to the surrounding environment.

So why exactly do leaves look like they do?

It all comes down to light, water, wind warmth.. and maybe also weevils.

As with all organisms, the first answer to the question of how leaves got their shape is ‘to improve their chances of survival’. With the close-second answer being ‘probably due to a combination of many different reasons’.

Let’s start with the abiotic factors. Namely light and water, but also wind and rain and heat and cold.

When it comes to leaf size and shape, it’s pretty obvious that larger and rounder leaves are the best for intercepting light. So shade-loving plant leaves tend to be larger than those of sun lovers, and also have less lobes (bits that go in and out). Because too much light can also be a bad thing, plants that are adapted to a high-light lifestyle often need to have leaves that are smaller and thinner, or have the ability to to curl or roll up or move around a bit if the rays get too strong.

Resource number two is water. Getting water to all leaf cells equally is easier if the leaf is either long and thin, or has a simple branched shape matching vein patterns. More rounded shapes require more complex networks. As with light, too much water can be just as problematic as not enough. If the spaces in between the leaf cells are completely saturated with water, carbon dioxide movement is slowed by about 20x, ultimately limiting the rate of photosynthesis. Too much water around a leaf can also increase the risk of infection by nasties that like a humid environment, like fungi. To get rid of excess water, some leaves have developed ‘drip tips’, small extensions at the end of the leaves that water can drip out of.

Other players in the abiotic selectors game include temperature and wind. Small leaves, like pine needles, have less surface area to volume ratio that large flat leaves, and can be packed tightly together- limiting their loss of heat in chilly climates. On the other side of the coin, more fragmented leaf shapes might help with dissipation. Some plants, such as Sassafras albidium even produce more ’rounded’ leaves in shady parts of the tree, and more lobed ‘heat-loss’ leaves out at the open ends of tree branches. Finally, wind can rapidly rip through large leaves- so structures that can curl, holes or lobes, or many small compound leaves might be an adaptation in the world’s windier woodlands.

The second bunch of selective agents out in the wild are the biotic factors- other organisms that eat and maim our beloved plant friends!

The truth is, so far, we don’t know very much about how bugs, birds and the like drive leaf shape diversity. We’ve mentioned before that variagation or spotted patterning might act to tell potential herbivors and home-makers that the plant is either inedible or already infested. Similarly, leaves with holes may look like they’ve already been eaten, and might even still have a herbivor or pest living inside them.

Within the wider context of the environment, having leaves that look different from those of plants around you can come in handy, especially if your plant neighbours have a reputation for being particularly tasty. By contrast, tasty plants can benefits from mimicking less palatable species- a protective method similar to that used by stripey flies that fake at being wasps. Australian mistletoe has been shown mimic its host-with more palatable mistletoe species more likely to pretend. Similarly, the harmless Lamium album, both looks similar to, and likes to grow in the neighbourhood of, the much stingier Urtica diocica (stinging nettle).

While these mimicking methods might work for larger predators, at the end of the day, the majority of herbivors are not mammals or birds, but insects. And while there are some studies that suggest that some butterflies use vision to recognize different leaf shapes, the majority of insects are more concerned with small scale challenges. Including troublesome textures (bumpy leaves), tricky trichomes (spiky leaf hairs), treacherous traps (carnivorous plants) and of course, terrible taste (secondary metabolites!).

Recently, a study by Higuchi and Kawakita looked at the insect-deterring properties of certain leaf shapes. They investigated a very particular bug- the leaf rolling weevil (Apoderus praecellens). The female weevil has a fancy habit that involves first choosing a pleasing leaf, then cutting it near the base to invoke wilting. Once the wilting has proceeded a bit, the weevil then folds the leaf along its main vein, lays an egg at the leaf tip, and then carefully roles the leaf from the tip to the base. The egg, protected within its litteral egg-roll of a leaf structure, is then gently dropped to the ground as the mother beetle makes the final cuts to free the leaf!

The authors compared the activity of the weevil towards two closely related plant species- the highly irregular and lobed Isodon umbrosus var hakusanensis, and the more regularly shaped Isodon trichocarpus.

The finding: female weevils preferentially put their eggs in a less-lobed basket (I. trichocarpus).

This preference didn’t seem to be related to taste or nutrition- weevils ate from both species, and young developed equally well regardless of which leaf species their eggs were wrapped in. Instead, several lines of evidence suggest that it really was all about the shape. Bugs can be superficial that way!

The scientists observed that when the weevils did choose the more lobed I. umbrosus, they tended to take the least lobe-y leaves on the plant. Plus, when I. trichocarpus leaves were decoratively chopped to look more like I. umbrosus, the weevils got wary.

As we mentioned, before any cuts are made, the female weevils do a thorough survey of the leaf, moving about it several times in a highly structured way (think ‘two paces, turn right, fifteen paces, turn right). While females on I. trichocarpus generally went from pacing to cutting, females on the lobed I. umbrosus were more likely to abandon their surveyed leaf. The scientists noticed that the lobation even seemed to make the weevils loose their way, and in one case lead to incorrect cutting behaviour. Finally, a brave female weevil who went ahead with rolling laboured for a longer-than-usual time, and eventually had to give up on the lobed leaf.

All in all, it seems that the weevils prefer to process less-lobed leaves. Although it can’t be said that weevil leaf processing and behaviour like it is a selective agent towards leaf lobation (we’re missing a cause an effect here guys), it is a pretty fun hypothesis. Plus, I kind of like the idea of a list of contributing leaf factors that goes like this:

A great review about leaf shape:

The one with the leaf-rolling weevils:

2 thoughts on “How the Leaf got its Shape”