It could be witchweed, some evil witchweed 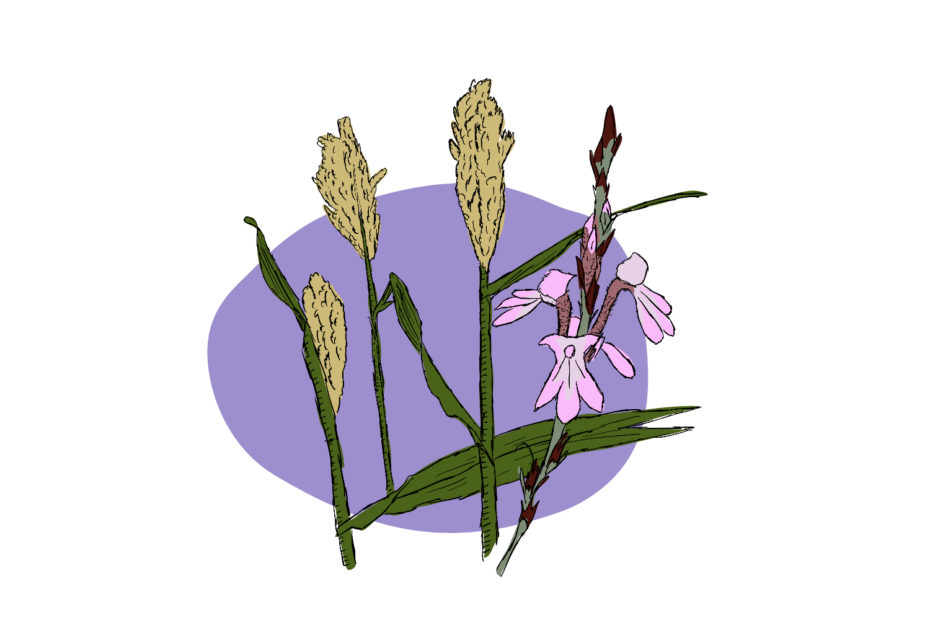 We’ve now entered the season where you might just expect the occasional witch at your front door. Instead of leading to panic, the meeting leads to the exchange of sucrose laden gifts for spooky performances – all at a safe distance, of course. For the crop sorghum, however, a witch at the front door leads to a much more drastic fate: death.

If you’re like me (a white boy growing up in a Western society), sorghum was never as important as rice, wheat, maize or potatoes. Which is something of a shame, because sorghum is a pretty amazing crop. It is a staple food source in many parts of the world, especially in African countries. The cereal feeds some 500 million people and is the fifth most important crop of mankind. So what makes sorghum so special?

Sorghum grows even on very poor soils and under very different climates. There are sorghum varieties that can grow in Central Europe or in Ethiopia, sorghum withstands heavy rains, has some salt tolerance and, most importantly, survives very hot and dry conditions. It has a couple of very clever adaptations that allow survival in different environments: it forms very deep roots to access water, can slow down its metabolism to overcome long periods of drought, and has a remarkable photosynthetic efficiency. Sorghum uses a very efficient type of C4 photosynthesis (something we talked about here and here). Overall, sorghum has the highest yield per unit of mechanical or human energy input of any of our major crops. The crop itself can be used in countless ways, you can eat sorghum, cook it, bake and brew with it, use its stems for fibres and firewood, and feed it to animals.

It is difficult to say why sorghum isn’t the number one crop in the world. A likely explanation could be historical and cultural reasons for the lack of sorghum in Western diets. Due to the historical prevalence of wheat and rice, and subsequent breeding programs that focused on these crops, sorghum has missed out on large-scale development and improvement. Sorghum is a crop with a high genetic diversity and its farmers often use locally adapted varieties that are optimised to the specific micro-climates of their growth regions. While genetic diversity is rather advantageous, it also means that it is not easy to introduce new traits into the many existing varieties.

Imagine this: you are farming sorghum and one morning, you go to check your fields. What looked like a healthy plot only yesterday, has now magically transformed into a dry field of dead plants. You come to the theory that you should work this out. “It could be witches”, you think, “some evil witches!” Quickly, doubts cross your mind: “Which is ridiculous because witches, they were persecuted, and Wicca good, and love the Earth, and woman power!” and you’ll just go and sit over there. * Well, this one time, you wouldn’t be too far off. The culprit is not witches, but witchweed.

*edit note from Tegan: Joram has been listening to the Buffy soundtrack again.

Witchweed, scientifically known as Striga spp. is the bane of sorghum farmers. When witchweed infects a field, the plant can lead to a complete loss of the sorghum harvest. Witchweed is highly adapted to live with and off sorghum, and key to its survival is a compound made by sorghum itself. Sorghum makes and secretes 5-deoxystrigol, which belongs to a group of chemical compounds known as strigolactones. This group of molecules is typically made by plants in their roots and works as hormones that pass messages through the plant. So when sorghum uses this specific strigolactone for its own purposes, the witchweed seeds in the vicinity “understand” the signal as a molecular beacon of sorghum growth. Witchweed then germinates and uses tiny root-like structures called haustoria to grab sorghum’s sugars and metabolites from within the roots. Witchweed establishes itself very quickly – in the span of 12 hours – as a very effective parasite, essentially sucking sorghum dry and leading to fields of dry and dead plants. After just a few days, witchweed itself pokes its head aboveground, thus solving the mystery around the sudden death of sorghum.

The witches’ work doesn’t end here. Witchweed not only effectively kills sorghum plants for its own benefit, it also creates a lot of seeds. 50,000 to 500,000 seeds are made by any individual witchweed plant and then distributed with wind, water and alongside harvested crop seeds (which in turn can lead to new infection once the crop seeds are used in the following year). The seeds are tiny dust-like things, so you can imagine how hard it is to get rid of them once they infect a field.

As a side-effect of their small size, the seeds contain very little in the way of energy stores: germinated the seeds support the seedling only for a very short time. This means that it is essential for witchweed to fine-tune their germination patterns to match host availability, but also opens a window of opportunity for farmers to tackle the problem. See, while witchweed can infect a number of species (amongst which are also rice and maize), the strigolactones required for its germination can also be made by non-crop plants. Even better, some of these plants are not even a host for witchweed, so the tiny seeds germinate and then die off because no suitable host is around. A strategy to manage witchweed has been to plant these “trigger plants” to exhaust the witchweed before sorghum or other crops are grown. With recent technical advancements, it has also become financially viable to biochemically synthesise simple strigolactones and spray them on fields with witchweed seeds to trigger their premature germination and resulting death.

And there is more we can do. We know the molecules that trigger witchweed germination – wouldn’t it be best to simply avoid making them in sorghum altogether? Without the trigger molecules, witchweed would never even get the chance to germinate. Breeding programs for sorghum are still in early phases, but the high genetic diversity of the crop holds a large potential to find local, resistant varieties, that could contain the key to witchy resistance. In 2016, researchers Daniel Gobena and colleagues published their findings on a sorghum variety with a mutated gene, called Low Germination Stimulant 1 (LGS1), that doesn’t accumulate the important trigger molecule 5-deoxystrigol. The key enzyme to make this strigolactone is mutated and non-functional in the LGS1 mutant. Instead, this type of sorghum creates a different strigolactone that works well for sorghum – there seems to be no growth penalty for plants carrying the mutation – but doesn’t trigger witchweed germination. Breeders can use the LGS1 related gene as a marker when looking for witchweed resistant varieties, or can deliberately modify this gene to develop their own.

There is a big caveat, though: we need more research. In the last 5 years, some important advancements have been made to better understand the relationship of witchweed and sorghum, but we’re still far away from creating many different resistant sorghum varieties. Witchweed has been observed to quickly adapt, so any approach that relies on only one way of creating a resistance will likely be overcome in a couple of years. We need more knowledge to find multiple approaches to breed resistant sorghum. Whatever tools we end up using, the outcome is well worth it. Imagine the versatile crop of sorghum feeding, supporting and supplying not only people across the African continent, but across the whole world – something we could depend on with the ongoing climate crisis.