There’s no such thing as Mar-Can’t-ia 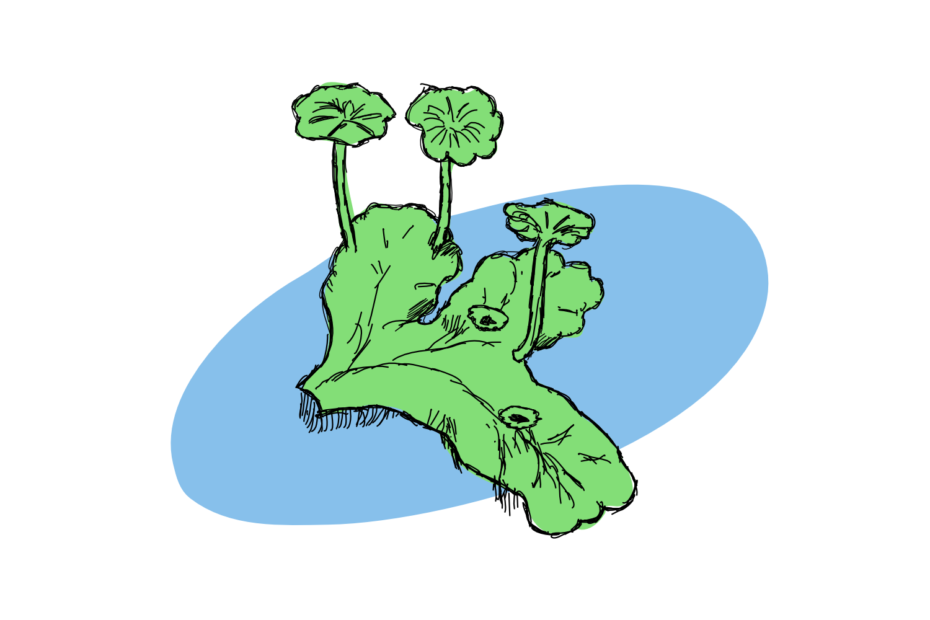 If you were as much of a plant-loving biology nerd as I was, you might still have some vague memories of plant classification systems rattling around from high school times. You known, the kind stuff that clusters with ‘useful’ memories of songs you learnt in grade three about environmentalism, the school motto, and your locker combination.

Because honestly, what even is a liverwort?

Let’s start with a picture:

Liverworts, or, more officially ‘marchantiophyta’ includes a group of about 9000 species of plants, which on average look a bit like slightly-ill leaves resting in earth or, as wikipedia gracefully states it ‘flattened moss’.

Their flatness is largely due to the fact that they lack vascular tissue, i.e., the xylem and the phloem that helps transport water, sugars and signals throughout larger plants. This ‘vascular lack’ also contributes to their size – they tend to be small – and their tendency to enjoy humid environments. Furthermore, based on this, and other features, liverworts are considered to be some of the earliest land plants – and liverwort fossils predate those of their mossy cousins.

Liverworts have the ability to reproduce asexually, and usually do. But that’s not to say that they can’t undergo sexual reproduction. They share a strange behaviour with moss. Most of its life, Marchantia sits around in the haploid or ‘n’ phase – the chromosomal equivalent of an egg or sperm cell. By contrast, we, and many plants, like to hang out as ‘2n’ or diploids.

Compared to angiosperms (flowering plants) – even fast growing models like Arabidopsis – the life cycle of Marchantia is pretty rapid: a common species can go from spore-to-spore in about 3 months, but takes only 2-3 weeks to develop clonally from leaf pieces.

As we’ve mentioned before, when scientists get their work on, they have to decide on a model species (to find out why, go here). When it comes to ‘simple’ plants, and liverworts in particular, the clear choice is Marchantia polymorpha.

M. polymorpha, generally referred to as Marchantia for short, has been hanging around in the scientific literature since ancient Greek times, when it was used to prevent infection in open wounds. While we’re not suggesting you pick up some liverwort instead of betadine, there is evidence that certain chemicals called terpanoids, found in oily droplets on Marchantia leaflets, might be both anti-fungal and anti-bacterial. Later in human history, the same M. polymorphia species was studied to understand plant and cell life cycle, vegetative propagation and plant body plan, and sperm motility and fertilization.

Flying into near-modern time, Marchantia was one of the first species to have its chloroplast (1986) and mitochondria (1992) sequenced, work that helped scientists understand the limitations of these organelle genomes. More recently, sequencing efforts on the nuclear genome have suggested that Marchantia contains many of the genes of other land plants. Interestingly, many land plants (including the model moss species) have undergone large-scale genome duplication events during their evolution – meaning that many genes are present in multiple, functionally redundant copies, which makes gene function hard to classify. But this is not the case for Marchantia – it generally shows less gene redundancy than other species.

This means that Marchantia might have all the features required to rapidly understand the missing functions of many genes. To help with functional charachterisation, methods have been developed to transform Marchantia by agrobacterium (using bacteria to infect cells and pull DNA into them) or biolistics (shooting DNA into cells).

The genetic tools in Marchantia are also more precise: unlike in most land plants, in which transformation involves the insertion of DNA fairly randomly into the nuclear genome, in Marchantia, the DNA can be ‘placed’ in a certain position, using a process called homologous recombination.

Taken together, Marchantia provides a set of interesting features: it is small, grows quickly, can be propagated sexually and asexually. The various unique features of the Marchantia, coupled with its important position in plant history, make it a superb model for the study of various molecular, cellular and developmental and evolutionary questions.

In short, there’s nothing that it Can’t do.

A review on Marchantia:

A set of molecular tools for Marchantia research: