No, your plants won’t purify the air of your office 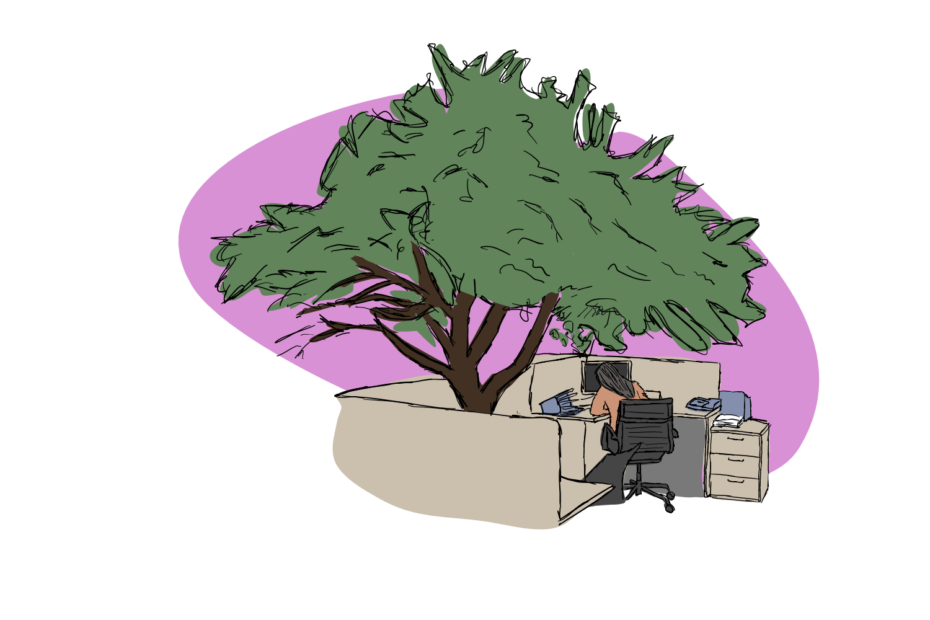 Sitting in an office is rarely fun. Sure, sometimes you sit with crazy colleagues that you quite cherish and who will eventually start a plant blog with you… but how often does that happen, really? Apart from the work itself, the ‘office’ part of office work means being stuck indoors for hours and hours, sitting at a desk, breathing that same old recirculated air filled with the smells of the floor, desk, chair, office printer, and of course your co-worker‘s new cologne. The air is stale, but even more than that, it feels like it might just be actually unhealthy.

Wouldn‘t it be great if plants could help you?

Air purification is a big topic in marketing.

Every day, countless kickstarter projects for new ionizing air purification machines go online, fancy British vacuum producers sell weird looking towers that magically remove all dirt from the air, and over on Pinstegram people seek out the power of plants to rid their office air of toxic compounds.

Proponents of plant based air purification cite a number of papers that could show that plants are able to remove ‘bad’ volatile organic compounds (VOC), like formaldehyde and chloroform, from the air. The findings have led to subsequent attempts to genetically engineer plants to be better at this air purification role. Tegan wrote a post last summer about the question: Would you put a GMOnstera in your flat if it would clean the air? She was disappointed to find that the number of non-GMO plants needed to have remove just 10 % of the VOC formaldehyde from her 60m2 flat would be 144. Higher even than the amount already found in her jungle-like living space.

Now, a new meta-study has examined 196 published experiments from 12 studies and calculated comparable metrics to judge the efficiency of VOC removal. And the results are sobering. The plants’ ability to remove VOC is about 100 to 1000 times less than that of a mechanical air purifier, and suggest that previous studies had overestimated plants‘ air purification possibilities.

So how did this happen?

One issue the authors pointed out was the box-based experimental design. A typical setup finds a plant in a box of defined volume (less than a cubic meter, usually) followed by exposure to different VOCs. The air in the box is sampled from time to time and conclusions are drawn – often that the plant managed to remove VOC to different extents.

A plant in a small box takes up a relatively large volume compared to the volume of the box. It‘s like putting a tree in your living room: it will probably be great at sucking up carbon dioxide and releasing oxygen, but also your living room is now the tree‘s living room. Similarly, the pot plant in the tiny box will look like it did a hell of a job sucking up those VOC. At least compared to a small yucca in a pot on your desk.

Another issue comes from the surfaces of and inside the box: VOCs like to interact with a lot of materials, including the insides of a clean box and the pots and soil of the plant placed inside it. Soil has an especially large surfaces and potentially even microorganisms that like to interact with VOCs. But many studies did not mention this ‘soil surface’ effect in their analysis and did not include controls to address it.

Of course, we’re not suggesting you go about throwing all your plants out (unless you want to donate them to Tegan, in which case, yes, give them away). While plants probably won‘t take care of VOC, they have been shown to improve overall well-being and they can humidify the air in dry spaces. If you want to get rid of household VOCs, one of the best ways is air exchange from the outside to the inside – also know as opening a window. No other method removes VOCs as effectively from an indoor space.

Maybe, one day, we‘ll have plants engineered to efficiently suck VOC from the air – until then just use your plants to make your office a more enjoyable environment.

1 thought on “No, your plants won’t purify the air of your office”