Pretty in Pink: The Clamydomonas Story 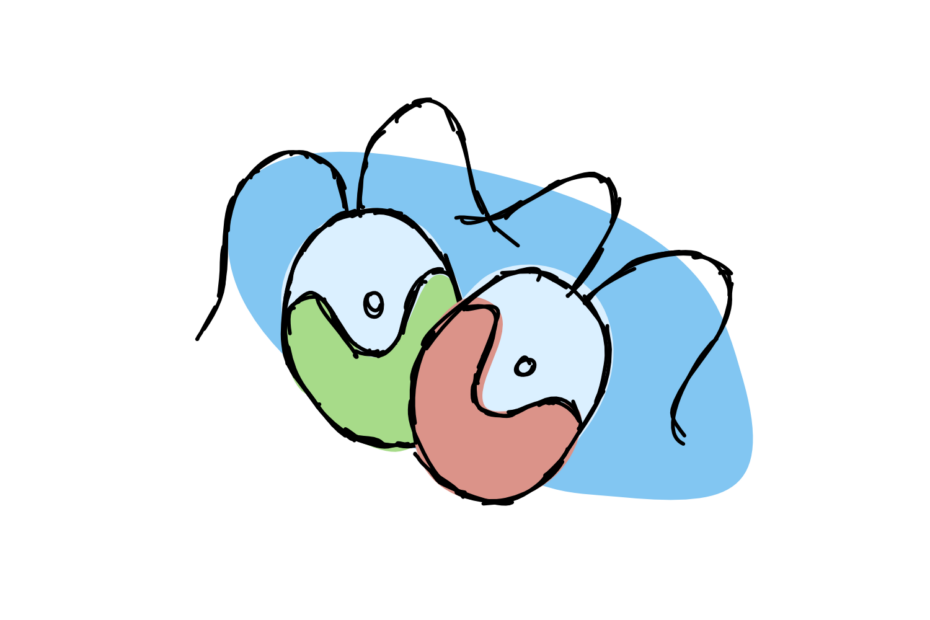 Also known as ‘would white salmon still taste as beautiful?’

Carotenoids are lipid soluble pigments that are created by plants and microorganisms, to be used for light harvesting, light perception and light protection (protection from the light). They are also, as the name suggests, kind of carot-y, by which I mean, roughly orange coloured. Carotenes found in nature tend to range from yellow through orange to red.

Colourful carotenoids are exploited by us animals, who, as a group, cannot make carotenoids ourselves, but sometimes modify the ones we eat. We use them as natural food colourants, in cosmetics, and in aquaculture. For example, the pinkish colour that salmon and some crustacean take on comes from a carotenoid known as astaxanthin- the focus of today’s story. Astaxanthin is acquired by wild fish from their food, but in aquaculture, it has to be added, or the fish stay white.

In addition to being the perfect pigment to produce pretty pink fish, astaxanthin is a particularly powerful antioxidant. For that reasons, it has multiple purported pharmaceutical purposes, including putative antitumour activity and prevention of cardiovascular and neurological disease *.

*Note, I’m always very skeptical about these health claims, and haven’t really looked into the literature on astaxanthin. But let’s just say that there is interest… which doesn’t necessarily mean scientific support.

In any case, because of the demand, the astaxanthin industry is estimated to be worth around 500 million USD/year or more.

So where do we get this valuable pigment?

Well, with a few exceptions, higher plants don’t make it. Rather, it’s produced in nature by multi- and single-celled algae species. Nowadays, we can also make it chemically, but this creates a mix of different forms (stereoisomers) of the astaxanthin molecules, and is therefore seen as less valuable than the biologically-made form, particularly for the pharmaceutical industry.

The ‘good stuff’ as it were, is made by a single-celled freshwater algae known as Haematococcus pluvialis (formerly H. lacustris). When properly induced – by starvation, high light, salt or elevated temperature, H. pluvialis starts to accumulate astaxanthin in massive amounts, up to 4% of its dry weight.

Unfortunately, the growth of the algae is a little complex. Plus, the pigment accumulation occurs only when the algae is shifting into a hardy ‘spore’ form, which also involves the development of particularly thick cell walls. Which means that although there’s a lot of astaxanthin in there, it’s not particularly easy to get out.

Because of these difficulties, scientists have tried, and generally succeeded, in producing astaxanthin in other species, including certain bacteria, photosynthetic cyanobacteria, yeast, and a handfull of higher plants. While some of these attempts have been successful, the ultimate success would be production in an autotrophic (as in grows without added food) species requiring simple and cheap growth conditions, which also didn’t have a problem letting the astaxanthin go when the time was right.

Previous scientists have successfully expressed the two H. pluvialis genes required to complete the astaxanthin biosynthesis process in Chlamy, and even managed to obtain some of the valuable carotenoid. But to really push the pink production capacity of the algaie, Perozeni and colleagues chose a different path.

Although astaxanthin has never been reported to be formed naturally in Chlamy, the nuclear chlamy genome has a sequence encoding a possible astaxanthin-making enzyme, CrBKT. Previous work demonstrated that this enzyme, when expressed in the bacteria E. coli, can produce astaxanthin from precursor molecules beta-carotene and zeaxanthin.

Perozeni and colleagues examined the expression of CrBKT under a range of conditions, and noted that it was was particularly lowly expressed. They hypothesised that if they ‘revived’ the gene – increasing its expression in the algae – they would be pretty in pink!

The revival process required several key steps. They first made sure that the gene was easy to read by the protein translation machinery (a process known as codon optimization), and then added elements that would help boost gene expression. They also shortened the gene a bit, and added an extra strong chloroplast targeting sequence (the enzyme works in the chloroplast). Finally, they put the new gene into a particular Chlamy strain known as UVM4, which was previously designed to give reliable transgene expression (something that Chlamy is not usually very fond of).

After that, the scientists got a fairly ordinarily sized Chlamy, that accumulated their ghost protein to high levels, and happened to have a slight ‘reddish’ tinge. And that colour could be confirmed to come from astaxanthin.

We may have mentioned before that science tends to be an iterative process. Here, Perozeni and colleagues tried various different conditions to improve their final astaxanthin output. They found that expressing their gene in a mutant that accumulates the astaxanthin precursor, zeaxanthin, helped. And that growing the algae with an additional carbon source, in the presence of carbon dioxide, also brought some colour to the algae’s proverbial cheeks.

All in all, the Chlamy still produced lower amounts of the valuable pigment by mass- only 0.3% of their biomass compared with 4% for H pluvialis. Nonetheless, the ease of producing the Chlamy, as well as the ease of extraction, go a long way to making Chlamy competitive, even in the current form.

Given that astaxanthin production only required over-expression of a single gene, the scientists further suggest that this biosynthesis might be easily transferred to other, more industrially suitable algae strains, such as Chlorella or Nanochloropsis. Unfortunately, these common species also have robust cell walls, which may ultimately limit their use.

Biopharming, the production of active molecules in plants and algae, can often be a complex process, requiring just the right combination of all factors. The right genes have to be present and active, the organisms should be grown with ease and the extraction of the compound has to be straightforward and economically viable. Federico Perozeni and colleagues worked towards the optimisation of a few of these parameters and surely others will develop them even further. Together, researchers will open up more and more ways to produce valuable molecules from plants and algae.

If you’re interested in astaxanthan, you can read a review, here.

2 thoughts on “Pretty in Pink: The Clamydomonas Story”