Raindrops keep falling on my leaf 😢 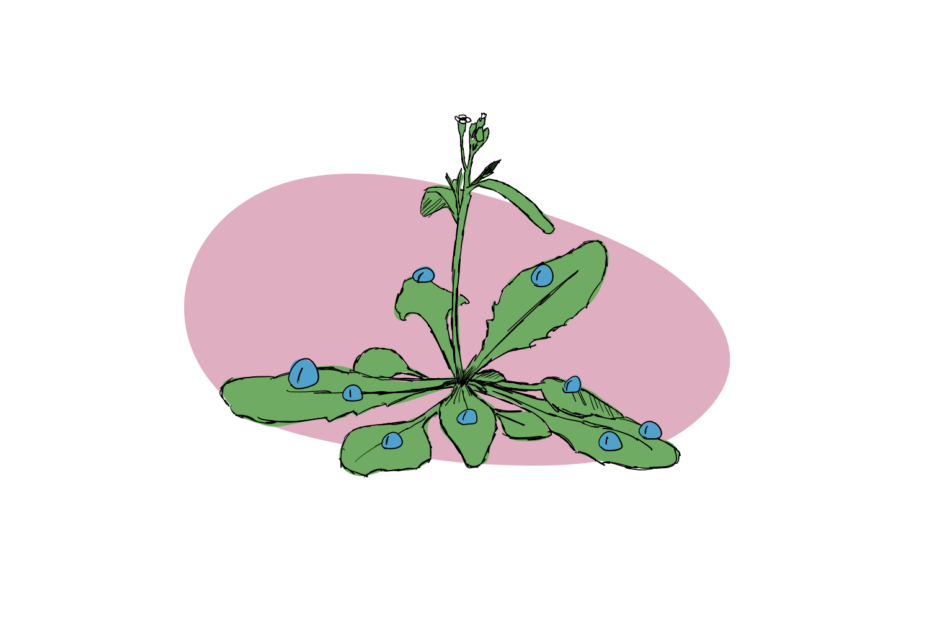 The outside world can be harsh – and I’m not only saying that because I am sitting at home with a cold, looking at the dull grey sky through the window. Too much of any of the elements- wind, rain, cold, heat- can cause us all stress. And they can stress plants, too. Today we’re talking about how plants feel when raindrops keep falling on their leaves…

Being unable to move out of the way means that plants have to endure whatever the environment throws at them. They can’t twitch when a bug bites, can’t move to the side when a large mammal like me plods its way through them, and they can’t seek shelter when it rains. Instead, plants have to learn – or rather have had to adapt – to simply deal with the nuisance, raise their defences, and power through.

The response of plants to touch has been studied extensively in the past, like this example of a plant responding to the vibrations of munching caterpillar.

The appearance of rain in the list of plant stressors might seem surprising. After all, plants love water and often rain is the only way to get access to it. Yet, in a new study by Alex Van Moerkercke et al, researchers found that Arabidopsis do in fact get quite stressed out by the rain.

The scientists sprayed Arabidopsis plants with water, and then measured the transcriptional response in several time points. Doing so, the researchers could follow which genes were activated immediately or after some delay in response to the water spray. Almost 1600 genes increased their activity in response to the trigger, but most of them returned to their default levels in under 3 hours, meaning that rain at least doesn’t seem to permanently freak out the plants.

Looking deeper into the set of activated genes, the researchers found MYC2, MYC3, and – you guessed it – MYC4. These three genes are transcription factors that control the expression of other genes (a cascade) and are themselves activated by the plant hormone jasmonic acid (JA).

The rise in activity of these three genes has dramatic consequences: over 230 genes are in turn activated, about half change their expression levels by over 100-fold, and all that in a time frame of about half an hour. To ramp up the response, MYC2/MYC3/MYC4 also induce the synthesis of JA, which leads to a positive feedback loop.

Taking the group of genes that are responding to MYC2 to 4, the researcher could create a new target list that might be useful as a starting point to investigate responses to other mechanical stresses like wounding or touching. Given that the response seen here, to rain, seems quite different from other mechanical stress responses, it seems like there might be much more to uncover.

Which leaves the question of “why?” What makes plants so afraid of rain drops that they trigger a massive molecular response within minutes after being hit?

Well, when rain drops hit a leaf, they create a spray of droplets that can fly several meters. And these droplets can contain viruses, fungal spores or bacteria that happily use this form of travel to infect new plants. This way of spreading pathogens is not unlike sneezing in large mammals like me.

Plants can’t protect themselves from the pathogen-ridden droplets, much like I couldn’t protect myself from the pathogens spread in the public transport system. Unlike me, however, plants might ramp up their defences after being rained on so that any potential pathogens have a harder time making their way into the plant.

And that’s why I have a cold and Arabidopsis usually doesn’t.

2 thoughts on “Raindrops keep falling on my leaf 😢”