The best scientists are the ones with the great CD collections 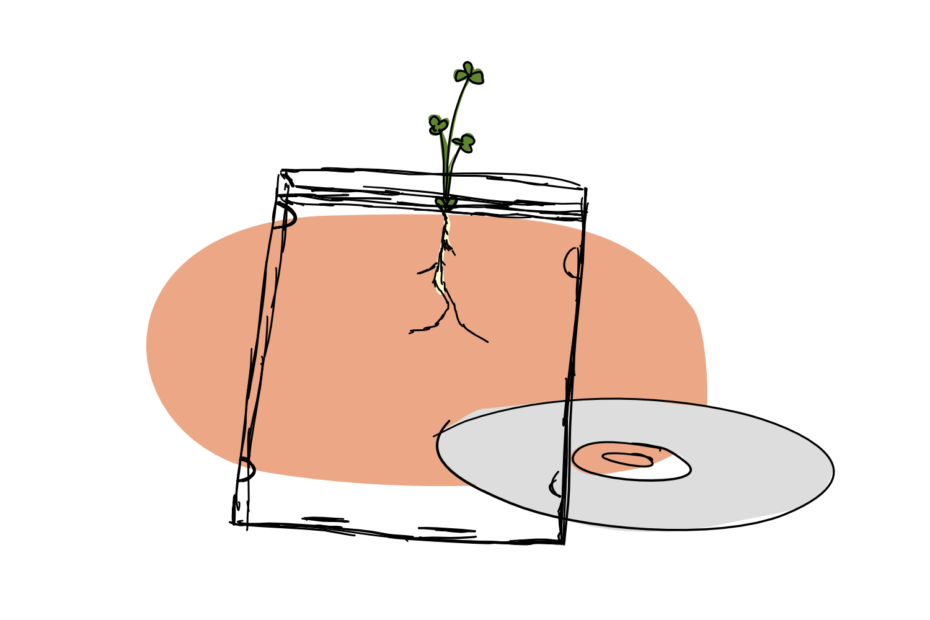 When we scientists look at plants, we’ve traditionally tended to focus on the bits of the plant that we can see. And yet the roots of the plant, which physically support the above-ground structures while also hauling in the water and basic nutrients the plant needs, go a long way to defining the productivity and fitness of the organism. So how do we observe what plants are doing underground?

In recent years, there has been increased interest in understanding root structures, and the interactions between root, soil and other soil organisms, and how they define plant growth. Although we recently published a post about see-through soil, the most common way to observe roots is using rhizotrons- specially built clear structures that allow non-invasively visual observation of plant root. Rhizotron is a fairly broad term – the structures can range in size from small plastic bags to huge underground windowed labs tunnelling under forests.

Although small rhizotrons designed for use with lab plants are commercially available, they tend to be expensive. Some scientists therefore opt for the more time-consuming method of building their own mini-rhizotrons, even though this choice tends to be hard to scale up. Alternatively, some scientists track root growth by invasive or destructive methods – although this of course makes it impossible to follow single plants throughout development and requires many more plants to begin with.

To construct the CD-rhizotrons, all that is required is removal of the black CD-holding media tray, and sealing of the sides with hot glue. Finally, the case is filled with sand, and placed inside an opaque sleeve made from a sandwich bag and duct tape, which shields the roots from light and prevents algal growth.

The authors optimised their system, finding, for example the best method to water their plants (either misting or soaking from the bottom works), and the best angles at which to grow them. For the latter, they found that tilting the CD cases led to better growth, and also forced the plant roots to grow against the back of the case, making them easier to observe. Root structures could then be non-invasively sampled by either scanning the CD case and using available software, or using more traditional ‘string and ruler’ measurements.

The authors compared growth of the native Eurasian legume Medicago lupulina, grown in the CD cases, in germination pouches and in small pots (Cone-tainers). The CD mini-rhizotron plants grew significantly larger than pouch plants, had a higher survival rate, and generally had more root length.

The beauty of this system is both its simplicity and its cost. Each case costs only about 27 cents, and the structures can be sterilised with bleach for reuse.

Those of you who have been following the blog for a while might have noticed that we often feature stories like this one, which focus on one aspect of ‘Science Hacking’ – using cheap or everyday objects to do science. We tend to love these stories for two basic reasons. Firstly, because they are mentally approachable: nearly everyone knows what a CD case is, which makes it very easy to visualise the work. In this case in particular, we love that the authors admit to taking inspiration from home-made ant farms, and further suggest that their low-cost mini-rizotrons could be used in similar, plant-based educational activities.

Secondly, and more importantly, they are financially accessible. Doing science, as it turns out, is incredibly costly, and a many great ideas are not carried through due simply to finance. This creates a disparity between rich labs and the poor labs, which can be seen within single universities, but, more alarmingly is a trend that carries across the globe. Research is largely funded and conducted in wealthy countries, with the Global South consistently underrepresented. Although low-cost methods can’t even begin to solve this problem, it may provide at least a tiny bit of help.

If you are interested in this topic, we strongly recommend, the journal ‘Applications in Plant Biology”s recent special issue, entitled ‘Conducting Botanical Research with Limited Resources: Low-Cost Methods in the Plant Sciences’. The CD-case work was published in the special issue, along with several other low-cost methods. We particularly recommend the commentary by Gillian H. Dean.

By the way, if you’re interested in root-related science hacks we’ve previously written a post about an experimental system that uses kitty litter.