Tools of the Trade: GFP 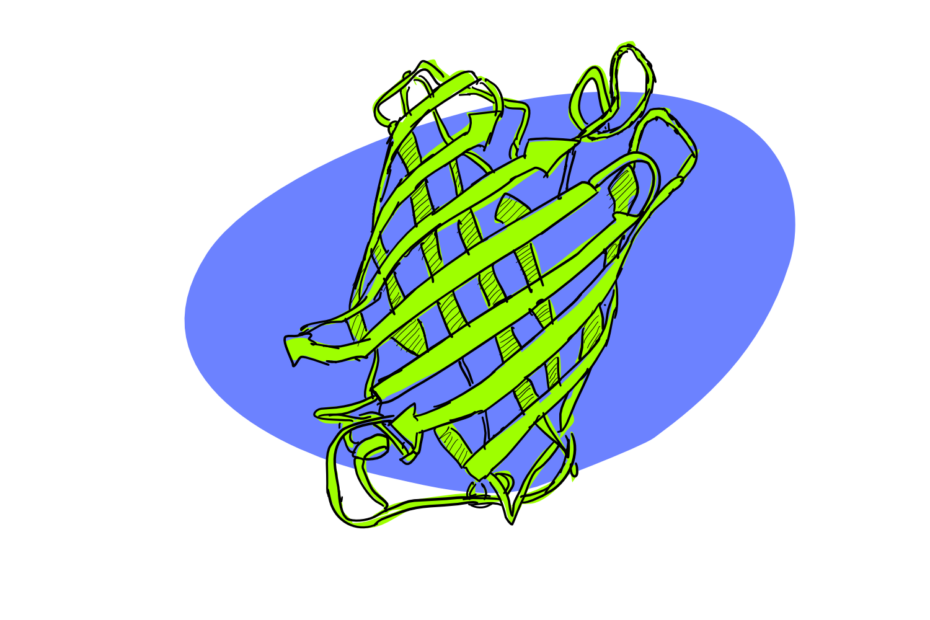 GFP stands for Green Fluorescent Protein. As the name suggest, it’s a protein. If you get really close, it happens to looks a little like this:

And as the name also suggest, GFP fluoresces (glows if you shine the right light on it). Although not visible to the naked eye, GFP gives a lovely green glow if you hit it with just the right wavelength of blue-UV light.

Despite the name being pretty generic, GFP tends to refer specifically to a type of protein that was originally isolated from the sea jelly species Aequorea victoria.

It’s not entirely clear what the sea jelly itself does with the glow – although emitting light seems to be not entirely uncommon for creatures of the deep. But the gene encoding its GFP has been cloned and co-opted by cell and molecular biologists throughout the world. It’s now used as a reporter of gene expression (more on that later), in species ranging from fish and mammals, to fungi, bacteria to of course, plants.

GFP was first extracted from Aequorea by Osamu Shimomura and colleagues in the early 1960s. The discovery required 10,000 sea jellies in order to purify just 5 mg of what is now known to be GFP. The scientists noted that the glow could be emitted from a single, likely proteinaceous organic component via the emission of a reaction between calcium ions and a specific protein. About 30 years later, GFP was cloned and sequenced by Douglas Prasher and colleagues, and then shown in 1994 by Martin Chalfie and colleagues to be able to be expressed in both E. coli and C. elegans. The glowing results demonstrated that the protein could glow at room temperature without needing other products from the native sea jelly species, showed that the GFP emitted a fairly stable glow, and indicated that the protein was not toxic to the organisms.

The crystal structure of GFP was described by two groups in the mid 90s, providing important information about the structure and residues of the protein that allowed the formation of the chromophore (the bit that gives colour). In 1995, scientists in Roger Tsien’s lab demonstrated a GFP protein with a single point mutation that had increased fluorescence, stability under light (photostability) and a shifted excitation and emission peak. Subsequent work further optimised the properties of the protein, as well as create various colour varieties.

In 2008, Shimomura, Tsien and Chalfie were awarded the Nobel Prize in Chemistry for their discovery.

The Problem in Plants

While GFP could be expressed just fine in worms and bacteria, attempts to use the new tool in plants hit a snag. In 1997 Haseloff and colleagues revealed that the gene expression machinery in Arabidopsis thaliana recognised a stretch of the heterologous GFP’s mRNA as ‘in need of some snipping’: mRNA processing resulted in a short and non-functional protein. To effectively fix the problem, the scientists changed the DNA code in a way that wouldn’t alter the final protein, but would prevent the plant cell from getting its splicing action on.

What can we do with GFP

GFP is currently used by molecular and cell biologists all over the world to as a reporter of gene expression. It was shown already by Chalfie’s group that putting the GFP code after a native C. elegans gene promoter (the bit of sequence upstream of a gene that tells it when and where to be expressed) led to the expression of the GFP in a pattern that matched the known expression of the original native gene.

GFP is a pretty short protein – only 238 amino acids long, or 26.9 kilodaltons (a unit of measurement used specifically for proteins). So instead of putting the GFP sequence behind the promoter alone, it’s quite often linked onto the back of the entire protein. That protein can then be tracked by location, within the cell and within different tissues of the organisms in question. Often, although not always, it’s possible to hitch the GFP onto the protein of interest without disrupting that protein’s natural function.

Because the GFP gene can be incorporated into the genome, it can also be inherited by the next generation, allowing the creation of stable GFP lines.

So GFP can be used to track a protein of interest, and map both where and when it’s expressed. On top of that, by tagging a protein that’s known to localise in a specific place, or appear only at a certain time of development, scientists can help isolate those cells or times in question, and therefore better understand cellular development.

On top of this basic and pretty-much-universally used function, GFP can also be used for a couple of other tricks. For example, GFP can be split into two halves, with each half attached to one of two different proteins that are suspected to hang out together in the cell. If these proteins do interact, their closeness can allow the GFP halves to meet up, subsequently allowing the protein to glow- a literal visualisation of protein-protein interaction!

GFP can also be used a more generically, as a bait protein. Using an antibody that specifically grabs hold of GFP can allow scientists to pull GFP out of a cellular mixture. If that GFP is attached to a certain protein, the protein will be pulled too- along with any other things that protein might happen to interact with! Although such ‘pull downs’ could technically be done using an antibody against the actual protein-of-interest, as opposed to its GFP ‘tag’, having a generic tag like GFP saves both the time and money involved in making specialised antibodies each time you want to focus on a new protein.

Also, in case green isn’t your colour, there have been several modifications of the chromophore (the colour-giving bit) of the protein, to make slightly different hues!

There are many more uses of GFP that we haven’t gone into here- literally an entire book worth.

Even a great protein has its limitations

In plants, researchers using GFP face an additional challenge: chlorophyll also enjoys absorbing and emitting its own kind of light. As it turns out, this can mostly be avoided by using the right experimental controls, tight filtering of light wavelengths and thinking about timing.

GFP has become one of the standard tools in the toolbox of any molecular biologist. It is not only a versatile little protein, it also allows us to actually see what’s going in the cell – a rare occurrence in a profession that mostly seems to involve mixing clear liquids mixed with more clear liquids. While not without shortcomings, GFP and its successors have a justified and permanent place. All thanks to a jellyfish that had to be a tad bit fancier than all other glowing creatures around it.

References for this article are embedded as links throughout.