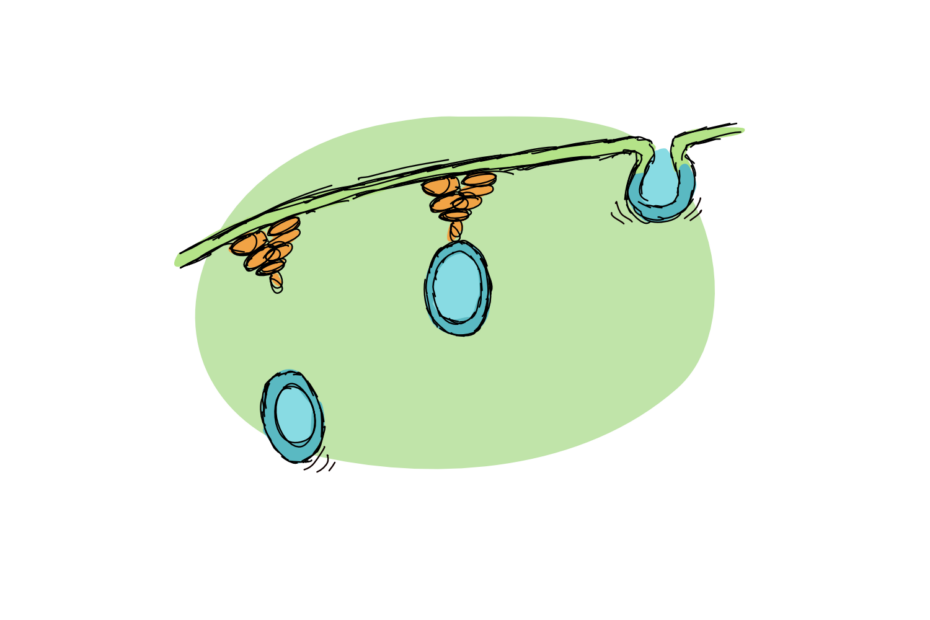 Plants form relationships with bacteria all the time, but these relationships vary a lot. Sometimes, the two are best friends who share nutrients, while at other times they are their worst of enemies. Bacterial infection of plants can cause galls, growths, wilts, spots, speck, scabs, blights and rots. Which not only sounds gross, but can also seriously damage the health of the plant, and the quality of the plant product we humans want to consume (food, fuel, furniture?).

In order to help plants fight the good fight against bacterial invaders, our job as humans is to first understand the current state of the war – how it is that plants use the weapons at hand to defend themselves.

What researchers have realised, is that to decipher the battle against bacteria, sometimes it is not only important to know where to look, but also when.

Last week, we talked about plants and bacteria being good neighbours to each other. They move in together and while the bacterium provides nitrogen, the plant shares its carbohydrates. Together, they both grow happily, healthily, and harmoniously. The two don’t exactly share the exact same living space though, but are instead kept quasi separate, partitioned by ‘privacy membranes’ that were actively shaped by the plant cell to be especially welcoming.

A pathogenic bacterium also wants a piece of the planty pie and the plant cell has to react. Instead of creating a welcoming environment, the plants respond to uninvited invasions by reinforcing cellular defences. Callose, a type of sugar, is deposited near the infection site, while special defence vesicles (pretty much weapon caches) make their way to the cellular membrane in search of exotic exocysts.

Exocysts (which aren’t that exotic, I was just being dramatic), are much less disgusting than the name implies. They are simple protein complexes that help to fuse small protien-filled vesicles to the cell membrane. Exocysts are involved not only in bacteria-plant interactions but also in a number of other processes that require the fusion of membranes. They are highly conserved across organisms – found in plants, yeast and mammals – and knocking out their genes to stop their function can lead to pretty severe growth defects.

We understand exocysts quite well in other organisms, especially in yeast, but we don’t really know how they work in context of plants v. pathogenic bacteria. Plant exocyst knockouts are affected in their defence system, but whether that effect is linked directly to exocysts or simply to the fact that the whole cell isn’t doing well, remains unknown.

Elysa Overdijk and colleagues from the Laboratory of Phytopathology in Wageningen, Netherlands, set out to find an answer to that question. They used Physcomitrella patens – a tiny moss – as their plant model, largely because of its highly accessible cell structure. Where seed setting plants bury their cells in layers and layers of even more cell, P. patens has fewer cell layers, which happens to make it perfect for microscopy.

As a trigger for cellular defence, the researchers challenged the moss with the bacterium Phytophthora capsici. The moss reacted with fortification, depositing a whole lot of callose and other structural materials. All of which created a pretty big problem for Elysa and her colleagues.

They were using confocal fluorescence microscopy to look into the plant cells – with fluorescence being the key word. Fluorescence microscopy involves shining light, at a certain wavelength, on the target and then measuring the different-wavelengthed light that the target sample subsequently emits. It is very similar to glow-in-the-dark toys that absorb a certain wavelength of light and then emit a different wavelength later. Where the toys might glow the whole night, the process is much quicker for fluorescence – only nanoseconds lie between the input of light and the output of other light.

Back to the problem at hand: the moss’s defence strategy involved stockpiling materials that showed strong natural fluorescence, known as autofluorescence. The researchers wanted to look at the exocysts, and, in order to do so, had linked exocyst proteins with a (green) fluorescent protein (GFP). But the defence-induced autofluorescence was covering up the GFP-exocyst signal. So, while they were looking at the right where, the when didn’t seem to be quite right.

One of the differences between this kind of autofluorescence and GFP lies in the time that the two take to emit their fluorescent signal. Autofluorescence is more of a quick pulse, while GFP initially shines brightly, but then also hangs around for a bit longer.

So the researchers closed the blinds on the microscope, illuminated their sample with a laser pulse, kept the blinds closed until the autofluorescence pulse had passed, and then opened it up again. While this did mean that they missed the time when the intensity of the GFP signal was the brightest, it meant that they were able to get rid of all interference of the autofluorescence.

They could not only demonstrate how the exocyst is directly involved in the defence system, they also showcased the powers of looking at the right time.

The Exocyst at a Glance