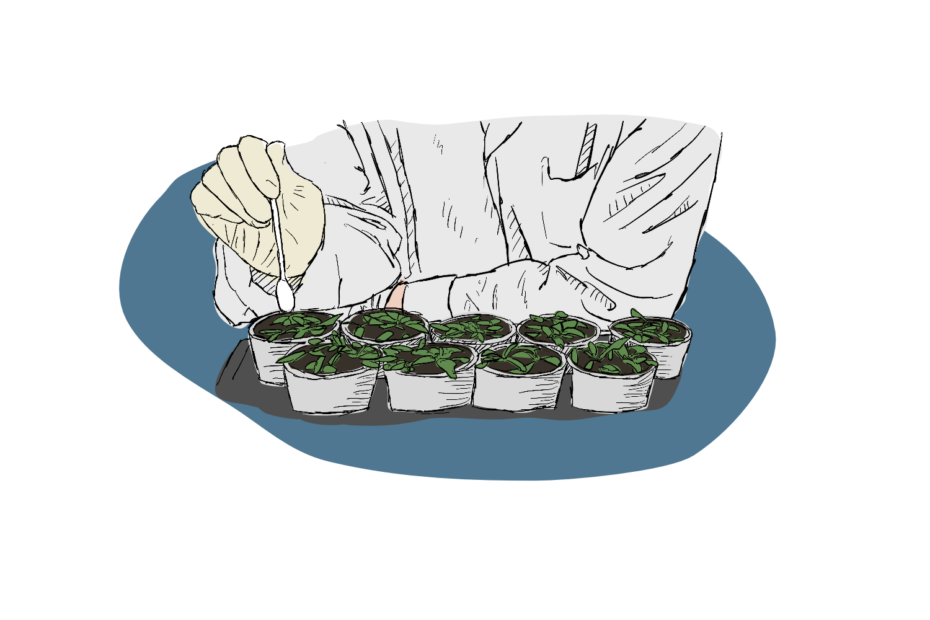 They’ve been described to “…capture the imagination as such behaviors are unexpected in otherwise often quiescent creatures” and to “…turn plants into aggressors against animals, trapping and devouring them”.

Today, we’re talking about the touch response of plants.

Although plants don’t give off quite the same dynamic flair that animals do, it’s clear that plants are both capable of responding to stimuli, and perfectly able to move. When thinking of plant movement, we tend to think of certain spectacular examples of snapping plants, or perhaps of the old high-school lesson ‘plants move through growth’, which isn’t entirely untrue. When we think of the stimuli that trigger these movements, we might think of responses to light, water, and the availability of important nutrients, to name a few.

But as well as getting their basic feed-me-water-me needs met, plants can also respond to a range of mechanical forces, and alter their growth patterns because of these interactions.

Plants can be touched, and well, the touching it touches them, at a deep molecular level.

Touch responses of plants are collectively known of as thigmomorphogenesis (thigma means touch in Greek, and morphogenesis refers to biological development). In the wild, thigmomorphogenic stimuli can include wind, rain or snow, and being poked or chewed by animals. It can also include the pressure a cell feels as it grows from the cells that surround it, the gravitational pull of the earth, the weight of own and other plant parts on stems and structures, and the resistance of soil felt by a root burrowing through through the ground.

Within thigmomorphogenic responses, there are two basic subcategories. The first is thigmotropic growth, which is a type of touch response that involves the plant changing the direction of its movement in response to the touch. The classic example is that of a vine that twirls its way around another branch, but roots avoiding solid objects in their tunneling travels would also fit the bill.

The second type is known as thigmonastic responses. Unlike thigmotrophism, plants responding thigmonastically always move in the same direction. Think for example the snapping shut of a carnivorous plant, or the collapsing leaves of a touch-me-not mimosa. Regardless of where the object is in space, when the plant gets touched, it responds in one direction.

Although our animal minds (and our animal senses of timing) are delighted by the rapid snapping of the Dionaeda, the gentle sticky strangulation of the Drosera, and the bee-whomping antics of Catasetum*, as it turns out pretty much all plants respond to touch.

*(we’ll have to come back to this one some day – Catasetum orchids like to viciously propel pollen sacks at their pollinators, with some theorising that the trauma of the parcel delivery discourages the insects from visiting any more male-looking flowers, thus encouraging them to make their way straight to a receptive female flower.)

The touch responses of your average plant (I’m looking at you, Arabidopsis), can involve simple things like changes in (planned) elongation. Grow a plant in a windy environment, for example, and it might decide to hunker down instead of growing tall and strong. Cue that one joke about how you find your way if you’re lost in a forest in Iceland: you stand up.

But touch responses can also include changes to flowering time, dormancy and senescence (ageing). Plants can alter how much chlorophyll they have in their leaves, can change the opening aperture of their stomata (leaf airholes), and can become more or less ‘pithy’ (of the ‘thick tissue’ and not the ‘forceful comment’ kind). They can also end up being more or less resistant to drought and pathogens. All from being touched.

The reason we know these things, is – well – because scientists have spent a good deal of time going around touching plants, and then (this is where the science comes in) seeing what happens.

Researchers have been able to show that touch responses can occur within just milliseconds or seconds, that the responses could result in prolonged changes, and that responses could occur both at the touch site, and far away from it. This, in turn, suggested the role of a singling molecules and it wasn’t long before researchers could track great waves of calcium ions literally cascading through the leaves of plants as they were poked and prodded in the name of science. In early studies in the 90s, scientists first identified a bunch of touch-responsive-proteins (i.e., proteins that changed their abundance when plants were touched), and perhaps unsurprisingly found that many of them were invovled in receiving these calcium signals.

Further research, this time in 2005 by Lee and colleagues, showed that the expression of a bunch of genes that encoded certain groups of master cellular controllers – kinases and transcription factors – were altered by touching. Meaning that touching plants could lead to activation of kinases, which act by altering protein activity, or of transcription factors, which then carry out their job of turning on and off the expression of certain genes. For example, a study by Wang, Yang, Qing, Ren and colleagues published in 2018, could link touching to the phosphorylation of a certain protein called TREPH1, with the ability for this protein to be phosphorylated further linked to a ‘decision’ by Arabidopsis plants to start developing their floral stalks (bolting).

I mention this last study in particular, because it shows one of my favourite things about science – the length that scientists are willing to go to to get results. The research involved the gentle prodding of arabidopsis plants with a cotton swab, which had to be done manually, by a scientist, for hundreds of plants. (I strongly recommend you go and check out the supplementary videos of the paper that show this action). In case that wasn’t enough, the scientists then confirmed the touch responses what they called ‘automated hair touch’, an action that involves a hair-containing robot and definitely invokes the word ‘stroking’.

One of the grander lessons from all of this (apart from our constant take home, that PLANTS ARE AMAZING), might be that scientists have touched plants so that you don’t have to. While most plants are gonna be fine with the occasional fondle, and houseplants in particular are designed to survive even in a harsh toddler-and-two-cat environment, it’s clear that plants do get molecular-level feels from being touched. I’m not saying you shouldn’t go to your local city park and hug your favourite oak, but if you find yourself in wilder parts, do keep in mind that even a gentle prod might be unideal for certain plants. (Also, have you seen how gross your hands even are – there are all KINDS of acids and germs and filth on them).

The quotes at the top of the page come from an AMAZING review on the topic:

Also referred to in text: