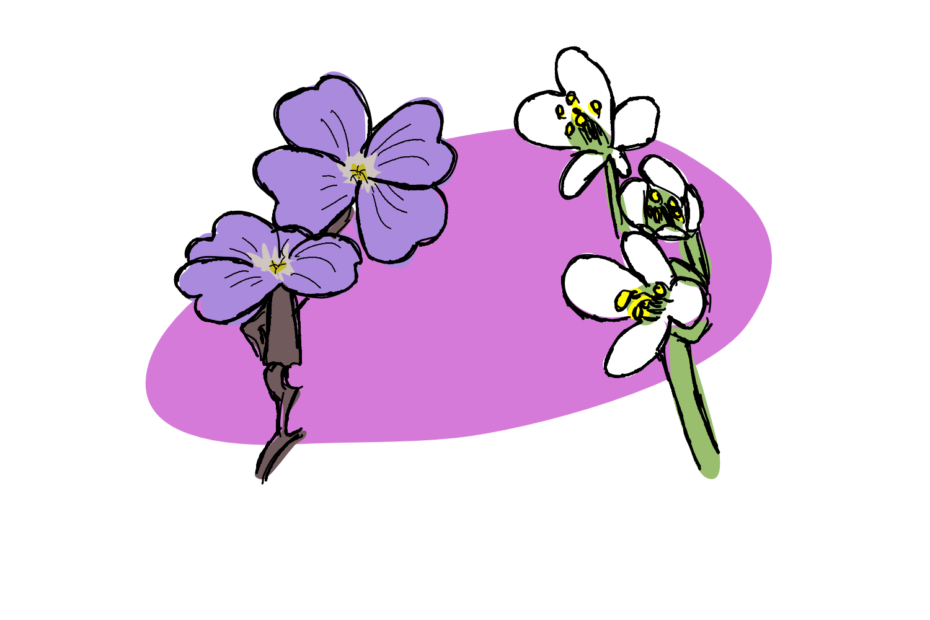 Plants can’t really choose whose pollen they get covered with. All kinds of pollinators bring all kinds of pollen to the party. And with it they bring the burden, to the plant, of figuring out which pollen to allow in and which to send away. But as it turns out, plants know just which molecular bouncers to use, to keep the party going.

Animals can choose to only sexually interact with their own species. And having two distinct sexes, which is the case for most animals, ensures that there’s no self-fertilisation. Together, these two simple mechanisms keep the gene pool diverse and intact.

Plants, on the other hand, have little control over the types of pollen that are brought to their door. In some cases, plants use all their alluring qualities to attract specific kinds of single-species loyal pollinators, but there’s rarely a guarantee that those birds or bees or bats or bugs won’t take a sip of closely related species and bring back its pollen.

On top of that, plants often present both sexes on the same organism, often within the same flower. Some choose to physically keep pollen and stigma separated so they won’t touch by accident. Or they separate the male and the female parts in time- making sure they become ripe at separate moments. But that might not always be enough.

To avoid inbreeding, some plants evolved to be self-incompatible. When their own pollen makes its way through pollinators to their own stigma, the pollen is rejected and no fertilisation happens. They achieve that through various molecular mechanisms.

In Brassicaceae (think canola and Arabidopsis, amongst many others), a two part system works like lock and key. The protein SP11 on the pollen (the male gamete) interacts with another protein (SRK) on the stigma (the entrance to the female ovary). If they fit, they’re related. The pollen can’t penetrate and the ovule remains unfertilised. Only non-self pollen is able to fertilise the ovule and produce seeds.

Not all Brassicaceae family members are self-incompatible, though. Our friend Arabidopsis is famously able to fertilize itself, a feature which is quite beneficial to scientists. Somewhere during its evolution it lost the lock and key system to distinguish self from non-self.

Still, Arabidopsis does like to stay true to Arabidopsis as a species. Recently, Sota Fujii and colleagues at the University of Tokyo asked how it is that Arabidopsis can still tell itself apart at the species level, even if its lost it’s ability to recognise itself at the individual level.

To test for inter-species compatibility, the researchers took pollen from Malcolmia littorea (a close relative to Arabidopsis) and used it to try to pollinate many different Arabidopsis ecotypes. While most of the attempts failed, a few of ecotypes actually did set seed.

The research team quickly compared their genomes to the incompatible ecotypes and found a previously unknown gene encoding a protein located in the plasma (cell) membrane of stigma cells that was present in incompatible but not compatible genotypes.

To test if this newly found protein was really responsible for the compatibility, they took an Arabidopsis ecotype – Col-0 – that didn’t cross with M. littorea, and removed its copy of the gene. And suddenly, Col-0 could co-parent with M. litorrea.

They decided to name the responsible protein Stigmatic Privacy 1 or SPRI1 for short. In further tests, they figured out that the SPRI1 mechanism works independently from the self-incompatibility through SP11 and SRK. SPRI1 seems to be a distinct system on top of the self-(in)compatibility.

It is important to note that before pollen can fertilise an ovule it needs to adhere to the stigma, germinate and penetrate it with its pollen tube. SPRI1 seems to block pollen germination and stigma penetration. It sits at the door to the ovule’s chambers and checks pollen before letting it in.

An interesting result came from observing what happens when multiple different pollen simultaneously knock on the door – maybe brought together by a rather promiscuous insect. In the absence of Stigmatic Privacy 1, Col-0 was less likely to fertilise the ovule than in the presence of SPRI1. The presence of foreign pollen also decreased the effectiveness of the correct pollen.

This result might be a key to understand the evolutionary advantage of such an incompatibility system: by selecting for the correct species before reaching the ovule the plant might be able to avoid costly fertilisation by foreign pollen. An inter-species fertilisation has a low chance of resulting in viable seeds but still costs a lot of energy to go through most of the process.

Imagine you’re going to your favourite club surrounded by loud strangers. If the bouncer knows his trade, he’ll spot you between the annoying strangers, let you in, and you’ll have a good time. If no bouncer is present, everyone might get in and some start trouble. In the end, you get caught in the action and everyone gets kicked out by security. Your night is ruined. Or something like that.

Obviously, there is still a lot to learn about the exact mechanics of SPRI1 function. What does it recognise? How do plants without SPRI1 cope with foreign species? How about other families outside of the Brassicaceae lineage?

I’m sure we will eventually find out. Until then, we think that SPRI1 works like a molecular bouncer making sure that only the right crowd joins the party.

1 thought on “Your name is not on the list”