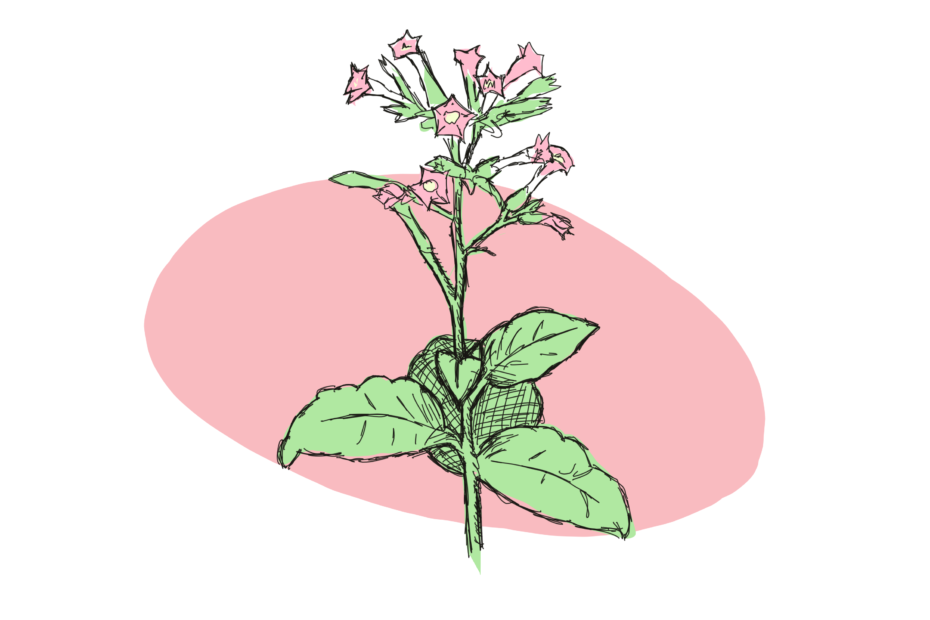 Look, I’m going to admit that I’m not being objective here. And a scientist should be objective. But today, I’m taking off my lab coat, and following my heart…straight to Nicotiana tabacum.

By the way, this is Part II in a multi-part series about plant lab rats. In the first part, we discussed why we use model organisms, instead of just using our favourite, let’s say, ficus friend. In short, it’s for simplicity (some plants are just more convenient), generality (we often want to find out how all plants work, not just ficuses), and history (organisms studied for longer are better understood, and we’ve developed better experimental tools for them).

And of course we introduced you all to the King of the Plant Rats, Arabidopsis thaliana. That humble weed that has fascinated molecular plant scientists for well over half a century.

But now it’s time to meet Nicotiana tabacum. a.k.a, tobacco.

So first up is the disclaimer: I included tobacco so early in the list because I come from a tobacco-obsessed lab. And because I love chloroplasts. And tobacco is very important when it comes to chloroplast research.

To start with, it was the first species to have its plastid (chloroplast) genome sequenced, way back in 1986. For those keeping track, two years before the plastid genome of another plant-friend- the single celled algae Chlamydomonas reinhardtii (Chlamy) was sequenced.

Tobacco’s was also the first higher plant whose plastid genome we could manipulate (although Chlamy beat it this time around). For nearly 30 years, we have been able to add, change and delete sequences in the tobacco genome in an extremely precise way: a process known as plastid transformation. This means that we can disrupt the expression of plastid-encoded genes and thus gain an understanding of their function. New, foreign genes can also be inserted into the tobacco plastid genome, with their expression allowed the accumulation of certain valuable protein products and metabolites (this process of using biological processes to produce useful pharmaceuticals is termed biopharming).

Which is maybe why the term ‘The Cinderella of Plant Biotechnology’. Because it can be transformed. Get it??!

But why tobacco? Well, Arabidopsis, for all its glory, does have a couple of drawbacks. Including the fact that, until this year, we were unable to transform Arabdopsis plastids and get fertile plants. (We discussed this amazing breakthrough in our first podcast episode). And monocotyledonous species, a large group that includes crops like wheat, rice and sorgum, remain untransformable.

So tobacco is the king of the plastids. But it also has a high biomass (great for those large-scale experiments), and grows in fields as a crop (all the better for learning about how plants we eat and wear grow!).

Of course there are drawbacks. Tobacco is sticky (a whole lot of secondary metabolites), large (you need more growth space), has a longer life cycle than Arabidopsis (5 months vs 3), and is poisonous (nicotine!).

But worst of all is its nuclear genome. While many species have a diploid genome (two copies of each genome), the tobacco genome is tetraploid (four copies). To make matters worse, tobacco is a allotetraploid1: meaning that the four copies are not the same. Instead, there are two copies of each of two types of genome. That’s because Nicotiana tabacum is a mix of two ancestral species, called N. tomentosiformis and N. sylvestris. They came together, putting all their chromosomes in one nucleus… making the beautiful N. tabacum.

I should point out here that many crops also face this problem. Allopolyploidization, in which the genomes of separate species come together to make a new individual, is a fairly common event in the history of crop development. Gossypium hirsutum a.k.a cotton is also tetraploid, and Triticum aestivum, or wheat, has 42 chromosomes coming from three ancestors (hexaploid!).

So maybe tobacco can also help us understand the polyploidisation process. But for now, it’s mostly giving us a bit of a headache!

Let us know in the comments if you have any more favourite facts about tobacco – reasons to love it or hate it. And tell us which of your favourite lab rats you’d like to see here next!

1 Some people call allotetraploids ‘amphidiploid’, meaning they have a diploid set from each parent.

Paper rightfully describing tobacco as the “The Cinderella of plant biotechnology”