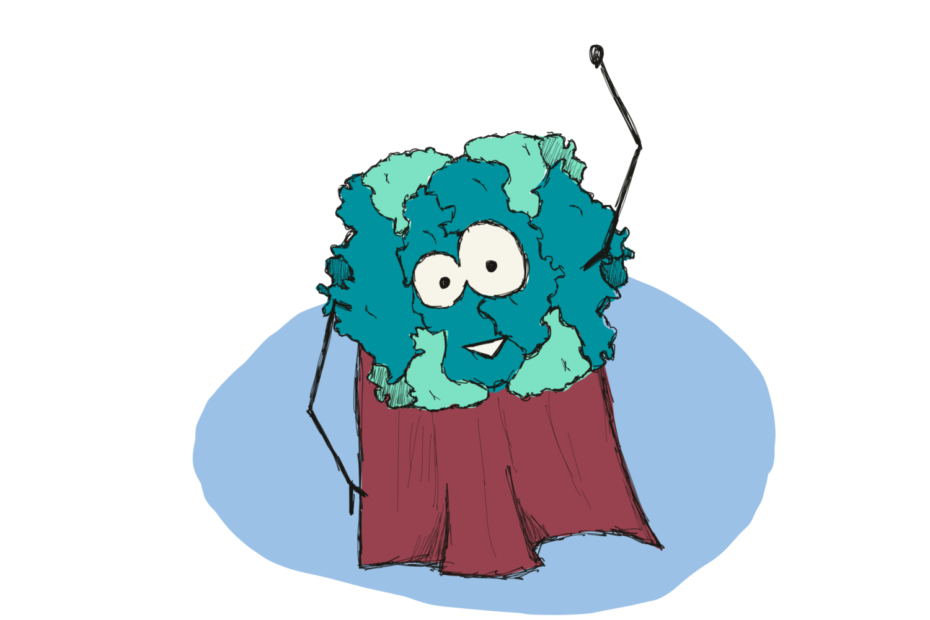 Welcome to the final instalment of our three part series on RuBisCO. Today, we discuss three key ideas and attempts to improve RuBisCO… or at least to more efficiently clean up its mess.

In case you missed it or forgot, in Part I, we discussed RuBisCO’s role in taking atmospheric carbon dioxide, and fixing it into something easier to use (sugars!). But we also mentioned that RuBisCO sometimes accidentally fixes oxygen, creating a toxic biproduct that requires a whole lot of energy to clean up. Scientists have proposed that improving RuBisCO might be a possible way to improve crop productivity.

In Part II, we introduced C4 and CAM, two carbon concentrating mechanisms that plants use to deal with RuBisCO’s shortcomings. As the name suggests, C4 and CAM plants isolate RuBisCO from the oxygen-containing air, and concentrating carbon dioxide in its vicinity. C4 plants separate RuBisCO in space (in special bundle sheath cells), while CAM plants separate it in time (they close their stomata during the day).

Before we get into it, just a quick reminder of why improving photosynthesis is important. The human population is growing at a terrifying rate, while arable land – the land which we can use to grow crops – is shrinking. The Green Revolution in the 60s saw optimisation of farming methods, and breeding programmes that created ‘elite’ crops. Now, it looks like improving photosynthesis itself might be one of the few changes we can still make that will lead to big gains in plant productivity.

So here it is, three suggestions to fix the trouble that RuBisCO makes.

The idea: C4 crops not only fix more carbon per unit of light, they are also more nitrogen and water efficient than C3 plants (although C3 tends to win in colder climates). So turning our C3 crops, which includes staples like wheat, rice, and potatoes, into C4 plants might help to overcome multiple limitations at once.

Why it might work: Convincing C3 to become C4 involves a huge amount of changes, from re-regulating spatial and temporal expression of genes, to changing the physical structure of the plant leaves. But C4 metabolism has evolved independently over 60 times, suggesting that it might not be so impossible after all. Furthermore, there are C3 and C4 intermediate species, which help guide us on our way, and demonstrate that it’s less ‘one momentous push’ and more ‘a series of incremental changes’.

By the way, an alternative to C4-based engineering is to use algal carbon concentrating mechanisms, which basically involve locking RuBisCO up in microcompartments called carboxysomes (and passing through the carbon dioxide). Some experiments have already shown that RuBisCO can also be encouraged to bundle up like this in plants.

So, what’s the story? Well we don’t know yet if it will work, but promising progress has been, and is being, made (see this review). Furthermore, there is a large consortium of scientists from many different specialised fields working together, all backed by some pretty serious cash (Bill & Melinda Gates foundation).

The idea: RuBisCO itself is a pretty big limiting factor when it comes to photosynthesis… so why not just make it better at recognising oxygen?

Why it might work: The rate at which carbon is fixed in the wild world is not even close to the rate at which it potentially could be fixed. Improving either the speed at which RuBisCO works, or the enzyme’s ability to not screw up (i.e, its recognition of carbon dioxide over oxygen) could save both plant energy, and fixed carbon.

So, what’s the story? Unfortunately attempts to engineer a better RuBisCO have largely failed. Part of this seems to come down to a ‘trade-off’, whereby catalytically faster RuBisCOs also play fast-and-lose with the molecules they fix (and more selective RuBisCOs are super sluggish).

Nonetheless, methods that don’t involve altering the catalytic activity of the enzyme might still be viable. For example, trying to generally decrease the size of the enzyme, and thus reduce the huge cost that plants pay to build the stuff (did we mention that it makes up nearly 50% of soluble plant protein?).

The idea: When RuBisCO fixes oxygen (every now and then), it creates a toxic product. The clean up process (photorespiration), is something of a nightmare, and a huge drain of energy and carbon.

Why it might work: Cleaning up the toxic glycolate use a string of enzymes, involves three biological compartments (the plastid, the peroxisome and the mitochondria), burns up cellular energy stores (ATP), and results in loss of fixed carbon. But several alternative pathways have been designed that could theoretically do the detox, for a discount.

So, what’s the story: Pretty positive so far! Recently, three different glycolate-detoxifying pathways were introduced into tobacco… and the plants grew better on the field! Given that this was something of a ‘first attempt’ some scientists suggest that further optimisation of these shortcuts might lead to even greater yield increases in the future.

By the way, we discussed this paper on the podcast episode “Pee-rigation”.

So that’s it, three methods that have been proposed to potentially help fix some of the problems that RuBisCO makes. As a note, we only mentioned a couple of things here that are fairly directly related to the enzyme itself. There are also a range of other suggestions for improving photosynthesis, including changing the structure and physical location of the (light capturing) photosystems, switching up their sunlight-harvesting pigment chlorophyll to capture a wider range of light, or optimising photosynthetic response rates to changes in light and other environmental stimuli.

But those stories are for another day. And another Enzyme.

A really nice and fairly recent review of the topic (general improvement of photosynthesis), can be found here:

Also check out some of the references from the Ort et al. paper, including these:

2 thoughts on “RuBisCO: Room for Improvement?”