Our plant science picks for 2019 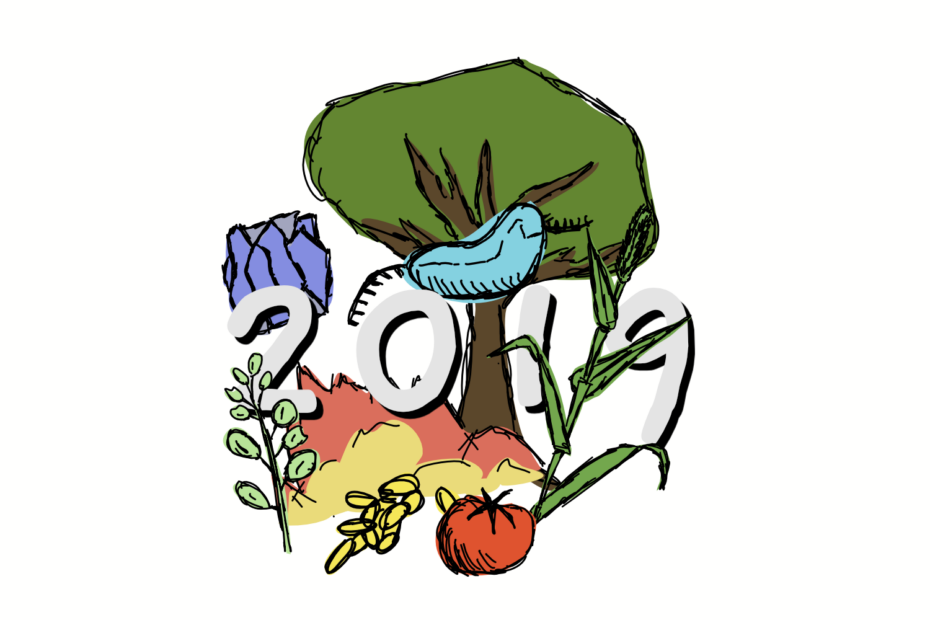 Well here we are, at the end of the… tennies?

Here’s our list of Big Stuff that happened in the world of plant science in 2019. We’ve probably missed a few, so let us know in the comments what you think was big this year.

CRISPR is nothing new in the plant world – in fact, it was first used to edit a plant genome way back in 2013. But 2019 has been a big year for this molecular tool, as CRISPR technologies have both diversified (increasing the possibilities of molecular manipulation), and become more precise (decreasing the chances of unwanted changes).

For those of you now yet in the know, we’ve written about the origins and development of CRISPR over here, and discussed why CRISPR is touted as a potentially massive player in the race to feed our growing population. Or you can read a review by some experts about the many applications of CRISPR over here.

We got particularly excited about the development of ‘template guided repair’ CRISPR systems, which helped the original ‘cut and cross your fingers’ tool mature into a more precise ‘cut and paste’ kind of thing (check out this podcast ep). And of course, in late October the whole world freaked out about Anzalone et al’s ‘Prime Editing’ CRISPR, which manages to make the changes without fully cutting the DNA double helix! (coming soon to a plant near you?)

Of course, with the good comes the bad (we’re sure you’ve all heard about the moral debates of human editing). While editing of plants usually comes with less ethical strings attached, the European science world still felt the impact of the ECJ landmark ruling in 2018 – CRISPR crops, which often have just one or two bases changed, are to undergo the same extremely strict regulations as other GMO plants. (Read more here). 2019 brought open letters, public calls for a legislative change and the foundation of initiatives to push for a less restrictive genome editing policy. In contrast to the EU decision, certain countries (Australia!) chose to take a softer ‘middle ground’ approach to CRISPR crops.

But what about the GMOs that worked?

In a world with an ever-increasing population (more mouths to feed), the ability to modify crops into bigger and/or better versions of themselves is something of a holy grail of plant biotech. At the very start of this year, South et al., showed how photorespiratory bypasses (i.e., a more energy-efficient cleanup of RUBISCO’s mistakes) in tobacco could increase biomass yield in the field. (Check out our series on RUBISCO over here, and our podcast on the South et al. paper here.)

Meanwhile, following on their work in Arabidopsis back in 2017, a group of scientists overexpressed a protein of the cytochrome b6f complex (a bottleneck to the photosynthetic light reactions) in Setaria viridis. Although S. viridis isn’t an overly useful plant – it is very closely related to the food plant S. italica (Foxtail Millet), and is also, like many important crop cereals, a monocot plant!

Breeding better crops is something that humans have been doing for centuries, but popular opinion has developed suggesting that these ‘better crops’ might actually only be better when grown under ideal conditions. A recent study finds that this simply isn’t the case- the new generation of plants also outperforms in unfavourable lands! (podcast here).

At the tail-end of the year, the Phillipines announced that Golden Rice is as safe as normal rice! As a reminder, Golden Rice is fortified with Vitamin A, and Vitamin A deficiency blinds and kill hundreds of thousands of children every year. Back in June, we wrote a piece discussing why the GM superfoods promised by science hadn’t yet made it to market.

There are about 30,000 edible plant worldwide, yet only approximately 150 of these species are eaten in large quantities. Recent advance in genome manipulation tools, and an improved understanding of both the various traits required for a good crop (modified seed shattering, size, dormancy, fruit size etc.) and the genes that control them suggests that de novo or re-domestication may be pathways to secure food, feed and fuel security. (Read about the domestication of the wild tomato species Solanum pimpinelllifolium here, or a review about de novo domestication here).

Here on the blog, we discussed pennycress, an oilseed relative of arabidopsis and canola, which was recently domesticated. Check out our interview with scientist Ratan Chopra here.

By the way, the October 2019 publication of the 1kp project, which sequenced the transcriptomes of 1,124 plant species, will really help plant scientist’s continued understanding of non-model species!!

The world is on Fire

The fires of the Amazonian rainforest ripped their way into the headlines earlier in the year- until now, nearly 1 million hectares of forest have been burnt by over 40 thousand fires. More recently, months of extreme drought, coupled with record breaking heat has left vast patches of eastern Australia (3 million ha) burnt. Fires, and other extreme weather events, are predicted by experts to increase in frequency and intensity as the climate change crisis continues. While many governments do what we can only described as ‘f***all’, the youth of the world have been gathering to protest the state of the world, a global movement that is simultaneously uplifting and terrifying (in its necessity).

Can planting trees help the problem?

Climate change is clearly no longer a question of ‘if’, but one of ‘how much’. Mostly, ‘how much will we lose?’. In the past year, scientists have struggled through terrifying questions including ‘can we tell when extreme drought is about to kill a tree … and intervene before the worst happens?’

One of the biggest plant-related stories was that of Bastin et al.: the authors calculated exactly how many trees we could put back onto the planet, and how much carbon those trees would sequester. The authors’ claims have come under fire from the scientific community (go here, but also, just google), with many suggesting that the estimates are overstated. In any case we hope that you all realise that it might also be useful to stop making so many emissions, rather than just hoping that science wizards will clean up the mess. By the way, we covered this one on this podcast episode, and honestly, that whole ep. became one big climate change discussion.

This year, the Australian Dungowan bush tomato, aka Solanum plastisexum (our ‘favourite plant’ of this ep) made the news for its sexual fluidity, and even became part of a larger discussion about binary definitions. But that’s not all: 2019 has seen a continuation in discussions about inequality and bias- those based on race, gender, geography, sexuality, ability and many more. But it’s only just beginning.

In a year that has been filled with news of sexual harassment, bullying and mobbing in scientific institutions across the world, we’re hoping for a 2020 that has more diversity, and, frankly, less bullshit. The science is out there people, Diversity makes for better science.

Predicting the future is really hard, but let‘s pretend we‘re an AI trained on the last few years and we‘re tasked with extrapolating the scientific findings for next year.

There is little doubt that CRISPR will continue its rise to one of the most important technologies of the future. We will see more methods brought over from medical research into plant science and it will only get easier to use CRISPR in research and application.

Unfortunately, the climate crisis won‘t lose any of its urgency. New research will find crops and genes related to better survival in times of heat, drought and storms, but let‘s face it: as long as we continue our path of carbon dioxide emissions, no wonder plant will save us.

To end on a positive note: we‘re fairly certain that the combination of better analytics, more detailed knowledge of cellular processes and powerful tools like genome editing will lead to exciting new crops that are more resistant to bugs, require less water and yield more fruit. Every year we improve our crops and 2020 will be no exception.

2020 will be an exciting year for plant science. And we‘re excited to take you with us!